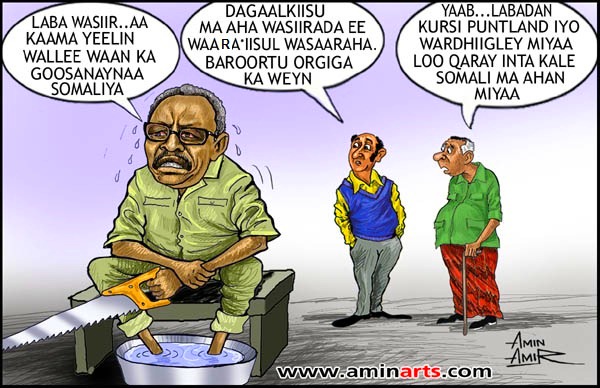 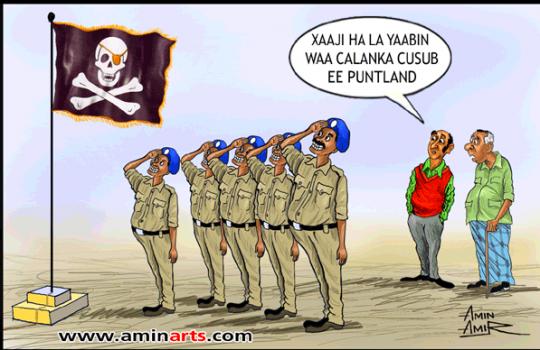 To the followers of Somali politics, the press release and the press conference held by the Puntland Administration last Sunday, seems like the rerun of the political showdown that occurred in the same month two years ago between Farole and Sharif. The whole event which was spread over a period of about three weeks (January 24, 2009 to February 14, 2009) was characterized by a media blitz, listing numerous grievances on the part of Farole. That public outcry was centered on the necessity to include Puntland in the then power-sharing process in Djibouti between the Transitional Federal Government (TFG) and the opposition. Farole repeatedly stressed that he had to be consulted with the selection of the additional members of parliament (MP) that would represent the clans that inhabit the Puntland region; otherwise, his Administration would view the whole process as being illegal.
On the eve of Sharif`s election, Farole issued a strong statement against the newly formed parliament, since he was not given the authority to select those MPs that would represent the clans from the Puntland regions (as these additional 275 MPs would be part of the election process for the new President). Farole clearly emphasized his objection to the whole process of the Djibouti power-sharing talks and its outcome.
Once Sharif was crowned President of Somalia, Farole started the campaign to secure the number two post of the TFG which is that of the Prime Minister (PM). The Puntland Administration threatened to withdraw its support for the newly appointed President and to secede from Somalia if Sharif did not choose the new PM among the list of names submitted to him by Farole.
Two days after, upon the selection of Omar A. Sharmarke as the new Somali PM by Sharif, Puntland welcomed the newly formed government and became a staunch supporter of federalism.
After reviewing these facts, some questions need to be answered. Biyokulule Online will also take this opportunity to draw a parallel between those events and the current stance of Farole`s Administration.
If the main objection to the Djibouti power-sharing process was the lack of consultation with Puntland with regards to the selection of the new 275 MPs, why the change of heart once Sharmarke was named PM of Somalia?
Could it be that the whole public outcry was a political ploy to secure the number two post in the TFG?
Therefore, do we have to literally take at face value Sunday`s press release, which stated that Farole`s Administration had withdrawn all its support from the TFG?
Are we expecting within the coming days, after some behind the scenes political maneuvers, to see Farole back peddle and recant his statements putting the blame on his mouthpiece ergo, Minister Daud Mohamed Omar (Bisinle), followed by another press release which will once again support federalism?
Let us assume that this time around, the political strategy previously utilized by Farole reaches its exhaustion and the TFG as well as the International Community do not respond to his threats and demands; do he and his cabinet have the right to unilaterally decide the fate of all Puntlanders?
As we know, Puntland was formed in 1998 as a regional administration that is part and parcel of Somalia. The elders of all the clans that inhabit the regions of Puntland agreed upon the creation of this Administration as an entity that is part of Somalia. Therefore, on the issue of withdrawal and secession from Somalia, there must be a consensus by all the clans who were part of the agreement from the inception of Puntland – in essence there must be at least a referendum.
Roobdoon Forum has previously articulated on the hidden agenda of some zealot Puntlanders who are beating the drums to have Puntland as a separate entity from the rest of Somalia.
Undoubtedly, another example that will create resentment towards the current leadership will be if it tries to toe the line with the current mood of over-zealous supporters of Puntland, who are pushing the idea of an independent state entity, without referendum. If this happens, Puntland leadership alone will be held responsible for Somali Weyn humiliation. [Read Here]
Biyokulule Online
Posted by Unknown at 8:43 AM