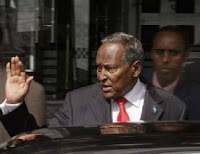 , -The president of 's transitional federal government, Mr. Abdullahi Yusuf, flew from the capital Saturday to .

Before leaving, President Yusuf told reporters at the Villa Somalia presidential compound that he will attend a United Nations session in , where he plans to push for more international attention on .

"I will give an address at the UN meeting to update member states about the situation in ," President Yusuf said.

He stated that the UN has "ignored" the plight of the Somali people, citing a drought the country is currently undergoing.

The Somali leader urged the international community to provide humanitarian assistance to , which he described as a country ravaged by conflict and drought for 18 years.

An ongoing 15-month Islamist rebellion has killed thousands of people and displaced most of 's civilian population from their homes.

The UN estimates that more than 1 million Somalis are displaced inside the country, creating what some officials have described as the world's worst humanitarian crisis.
Posted by Unknown at 8:01 AM