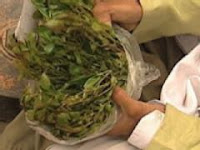 SAN DIEGO -- At the Coffee Time Daily café in City Heights, a group of Somali immigrants gathers to share coffee and stories. In another time, and another place, instead of drinking coffee, men their age might be chewing a plant known as khat. "People just enjoy it based on the culture, the way they were brought up," explained Omar Yusuf. He says khat to Somalis is what cigarettes or alcohol is to Americans. "Just to make yourself, not to be depressed, just to be happy," he said. The plant is grown in Eastern Africa. It's a major crop for Yemen and has been chewed for centuries in countries around the Horn of Africa including Somalia, Yemen, and Ethiopia. In many parts of the world, khat is legal. However, in the United States its main ingredient is considered by federal law on par with heroin or crystal meth. The entire plant is outlawed in California and seizures are up. "It's been gradually growing," said Amy Roderick, special agent with the Drug Enforcement Agency. Khat was first seen in San Diego in the late 1990s, and then it spiked in 2005, according to the DEA. Khat-related seizures and arrests have so far been limited to within the Somali community, which is sizable in San Diego County. The fear is that khat usage will spread beyond the typical traditional users. "As with any other illegal substance, there is a significant amount of money to be made," Roderick said. Typically, the plant arrives in the United States from other countries where it is legal. It loses its potency within 48 hours of being harvested, so it's often smuggled through express mail. "Or private courier, like UPS or DHL," Roderick explained. In September, two parcels of nearly 80 pounds of khat labeled "green tea" were intercepted by the Department of Homeland Security. They were shipped from London and addressed to an apartment in City Heights. A woman who is staying in that apartment said that her relative, Amina Issak, was arrested and is still in jail. Issak and another Somali woman are each facing one count of felony possession to sell. Issak's attorney Frank Birchak said he can't comment about the facts of the case, other than "I think the story will be very different than what the DA is charging."..more..
http://www.10news.com/news/21654022/detail.html
Posted by Unknown at 10:59 PM