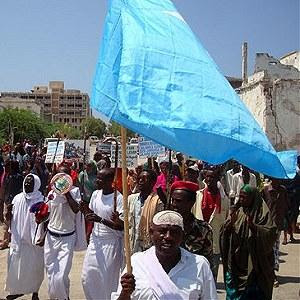 Somali demonstrators take to the streets in government-controlled southern part of capital to protest the actions of Al-Qaida-linked groups in their country, Mogadishu (File Photo)
Somalia's al-Shabab Islamist rebels have claimed responsibility for Tuesday's suicide car bomb attack at a base for African Union peacekeepers in Mogadishu. The al-Qaida-linked militants say the bombing was in retaliation for the recent killings of two senior al-Qaida commanders in Iraq.
The spokesman for al-Shabab, Ali Mohamud Rage, called Tuesday's suicide attack a "success," claiming that the explosion destroyed a former Somali commercial bank building housing African Union peacekeeping troops from Uganda. 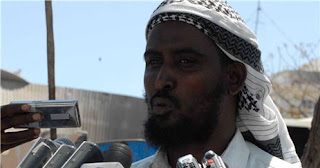 Rage says the blast killed 20 peacekeepers, disputing statements made earlier by the Ugandan spokesman for the peacekeeping mission known as AMISOM.AMISOM spokesman, Major Barigye Ba-Hoku, told VOA Somali Service that African Union soldiers foiled the attack by killing three would-be suicide bombers inside the vehicle. He said two soldiers were wounded when the explosives-laden vehicle blew up before it reached the entrance to the base. Ugandan newspapers subsequently reported that five soldiers had been wounded, one seriously.Al-Shabab, considered a terrorist group by the West, says the attack was carried out in retaliation for the killing of two top al-Qaida leaders in Iraq. Abu Omar al-Baghdadi and Abu Ayyub al-Masri were killed last week during an Iraqi-U.S. military raid on their safe house in Tikrit, north of Baghdad.Al-Shabab, which is fighting to create an ultra-conservative Islamic caliphate in the Horn of Africa, recently proclaimed allegiance to al-Qaida and has expressed solidarity with al-Qaida-affliated groups. Al-Baghdadi was the self-described leader of the Islamic State of Iraq, an off-shoot of al-Qaida, and al-Masri was a weapons expert trained in Afghanistan.

The suicide car attack in Mogadishu Tuesday triggered another round of violence in the Somali capital. Witnesses say al-Shabab traded mortars and gunfire for more than four hours with AMISOM, Somali government troops and pro-government militiamen. At least 14 civilians are reported to have been killed in the cross-fire.Uganda and Burundi are the only contributors to the 5,300-member peacekeeping mission in Somalia, which has a mandate to keep Somalia's weak U.N.-backed transitional government from being toppled by al-Shabab and other radical Islamist groups.The United States and European Union countries are heavily involved in the training of AMISOM and Somali troops, making them a frequent target of insurgent attacks. Suicide and roadside bombings blamed on al-Shabab have killed nearly three dozen AMISOM soldiers since the first contingent of Ugandan troops arrived in Mogadishu in 2007.In recent months, AMISOM, as well as insurgent groups, have been sharply criticized by Somali and international human rights groups for indiscriminately shelling populated areas of the capital and causing high civilian casualties. An estimated 21,000 Somalis are believed to have been killed, mostly in Mogadishu, since the insurgency against the government began three years ago.