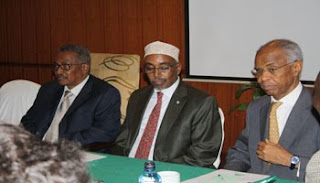 The Somali transitional federal government and the authority of the semiautonomous state of Puntland have on Monday signed agreement in the Kenyan capital Nairobi.
The agreement signed between the two was basically based on three major issues, to jointly fight against the pirates in the Somali waters who are attacking both the foreign vessels,
and the Somalis hired commercial boats, to jointly eradicate what they called as intruders in the Somali soil and achieve back the sovereignty of Somalia, and lastly but not the least on the side of education. “The bilateral treaty says that the Somali government institutions and the authority of the semiautonomous state to jointly implement the points agreed upon” said Mohammed Osman Edson the Somali consulate speaking to Somaliweyn Website has.
This treaty came after the president of the Somali republic Honorable Sheikh Shariff and Honorable Mohammed Farole the president of the autonomous state of Puntland meet in the Addis Ababa the capital city of Ethiopia.
On behalf of the Somali transitional federal government the treaty was signed by Abdulla Boos and on behalf of Puntland the treaty was signed by Abdullahi Ahmed Jamac Ilka Jiir.
This treaty as well becomes the second phase of an earlier treaty signed in Galkayo town sometime last year.
There were international bodies witnessing at the occasion of the historical treaty between the two sides, including the United Nations representative for Somali Ahmed Olud Abdalla.
President Farole, Deputy TFG Prime Minister and UN representative for Somalia Ahmedou Walad Abdalla at signing cermony between the Puntland government and the TFG.
On this symbolic and historic day of ours the 12 April 2010 the Puntland government and the TFG government reach an understanding which has been signed formally in a ceremony held at Safari Park in Nairobi, Kenya which constitutes the re-establishment and reinstating of the National Army in Somalia, fighting of Anti Piracy, Fight against environmental dumping and illegal fishing of the coast of Puntland for that the TFG agreed that the troops will be trained in the beautiful and peaceful Puntland which is 1/3 of Somalia but has been not in a working relationship with the TFG government in Mogadishu which only controls a half square mile of the capital.

Also in Puntland a base where all the Anti-Pirate missions of the coast of Somalia are controlled will be established there. This is a great day for Federal Somalia.

The International Community was hard in pushing this agreement and Puntland's importance and role has thus been confirmed, Somalia is Puntland and Puntland is Somalia as can be seen by the celebration of the 50th National Army Day which has been greatly and hugely celebrated in Garowe, State capital of Puntland today.