Herders in Abudwak up in arms with charcoal traders 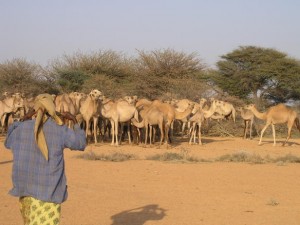 update on Al-Shabaab Razes Somali Forests to Finance Jihad
Herders in parts of Adubwak district are warning that continued deforestation in the area will lead to severe consequences for their livestock, affecting key production sectors if it proceeds at the current rate.
They accused charcoal traders in the district for destroying forests to eke a living while at the same time destroying the livelihood of livestock keepers in the area.Mohamed Abdulle, a local herder in Birgosole area told terror free somalia  that forest resources have been increasingly exploited as people have turned to alternative means of income by chopping off trees to transform them into charcoal.He said in addition to the recent drought in the region, human activities have also contributed to the destruction of grazing lands in the entire Galgadud region.Abdulle further said that forest destruction and logging of tress has adversely affected their livelihood which is based on livestock herding.Meanwhile, Ahlu Sunna administration in the district has threatened that stern actions will be taken against people who are found felling trees in order to transform them into charcoal for commercial purposes.In a country where there is no an insufficient and cheaper alternative to charcoal, tree felling and a great dependence on charcoal are adversely affecting the environment leading to a scenario similar to the recently witnessed human tragedy in the country.
Posted by Unknown at 6:03 PM