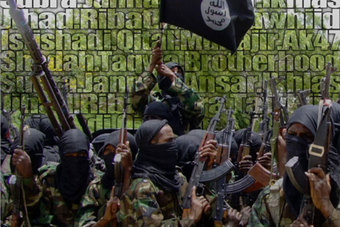 
Published on March 3rd in English and Swahili, the 42-page issue portrays democracy as incompatible with Islam, interprets accidents as divine intervention, and offers crash courses on topics ranging from mobile phone security to making a Molotov cocktail.
The cover shows a photo of Sheikh Aboud Rogo Mohammed, a charismatic cleric and supporter of al-Shabaab who was killed in a drive-by shooting in Mombasa on August 27th, with the headline "Catalyst of Change".
Al-Shabaab attempts to inspire Rogo's followers in Kenya to join its ranks by re-printing a statement the group released on the day of his killing and a publishing a feature story only in Swahili.
The statement urges Kenyan Muslims to "stand united" and "take all necessary measures to protect their religion, their honour, their property and their lives from the enemies of Islam".
The story blames the Kenyan government for colluding with Western countries in the cleric's death and legalising the killing of Muslims in the Coast region, which has long had grievances with the central government over development and allocation of funding.

Gaidi Mtaani also goes so far as to accept an alliance between al-Shabaab and the Kenyan secessionist group Mombasa Republican Council (MRC).
"By joining MRC, al-Shabaab is hoping to have a partner in crime to replace the losses it suffered in desertions and defeats," said Coast Police Chief Aggrey Adoli. "It may also be seeking to be hosted by the MRC."
Adoli told Sabahi that security forces would crack down on criminal activities in the region, dismissing the magazine's allegations that Muslims have been persecuted as unsubstantiated.
"The group is using every propaganda tool to disrupt the harmonious co-existence of different faiths in the country, but we are alert to the fact," he said.
Wilberforce Onchiri, a Nairobi-based security consultant and retired army major, said the militants are attempting to exploit poor people who may be persuaded by reading the magazine to engage in violence because they feel disenfranchised.
"The group is targeting individuals who may be frustrated in any way … To al-Shabaab, it does not matter whether the killing is carried in the name of jihad or disgruntlement. Any mass killings will do just fine for them," he told Sabahi.
People such as these can afford to make the home-made bombs featured in the issue because they can be made from inexpensive and easily available materials, Onchiri said.
The tutorials show that al-Shabaab no longer enjoys safe havens and cannot conduct training sessions as easily as it used to.
"The bombs crash course is testimony that they do not have a place to train [recruits] and are willing to use anyone, regardless of their motivation, to cause instability," Onchiri said. "Their aim is to spark chaos of any kind and claim responsibility to show that they matter and have influence. They want to remain relevant."
The article about mobile phone security also indicates that the group is feeling the pressure from security forces, he said.

The magazine's new issue continues al-Shabaab's string of public relations initiatives that aim to counter reports about infighting and financial challenges that plague the group and undermine its leadership.
On December 26th, the Muslim Youth Centre (MYC), which claims to be al-Shabaab recruiting arm in East Africa, released a press statement titled "Inciting and Inspiring Jihad: MYC in 2012", in which it boasts about the Kenyan mujahideen's supposed successes.
On February 18th, an unknown author who claimed links to al-Shabaab released a document titled "Turning away from the truth won't make it disappear: Demystifying the Abu Mansur saga". The document aims to discredit American-born jihadist Omar Hammani, also known as Abu Mansour al-Amriki, a former spokesman for al-Shabaab who has recently become publicly critical of the group.
On February 25th, al-Shabaab's media arm al-Kataib Foundation released a recruitment video called "Mujahideen Moments", which tried to underscore the group's message that all is well between local and foreign jihadists.
The latest edition of Gaidi Mtaani also takes issue with democracy, a day before Kenya's general elections on March 4th, making the case that elections and the parliamentary system are incompatible with Islam.
Yet Sheikh Mohammed Hassan, chairman of the National Muslim Forum's Wajir branch, said al-Shabaab is twisting the definition of democracy to suit its purpose of terror and take advantage of those who do not know any better.
Hassan pointed out that al-Shabaab defines democracy as granting man absolute power to make laws. "Owing to this, it has made him a god besides God and a partner concerning the right of legislating for the creation," the magazine says. "Democracy, with its parliaments and elections, is nothing but a deception which drugs the Islamic capacities."
But Hassan rejected al-Shabaab's depiction of democracy. "Politics and religion are very different," he told Sabahi. "No one is worshipped in politics to warrant the comparison with God. People participate in electing leaders so that they can have people to steer them to development."

The first edition of Gaidi Mtaani, or "Terrorist on the Street", was published in April 2012 and mocked the Kenya Defence Forces' Operation Linda Nchi (Protect the Country) by changing the name to Operation Protect Islam. The second edition, published in July, focused on Kismayo, the militant group's last remaining major stronghold at that time, which it lost in September.
Eight months later, al-Shabaab's waning influence has left it with little choice but to ratchet up the propaganda, said Nairobi-based security consultant Reuben Ngugi.
"This third issue is all about reacting to events rather than providing the much needed leadership to the demoralised group," he told Sabahi.
The magazine's inconsistent frequency shows that al-Shabaab's military capability has weakened and it is desperately seeking new recruits, he said. In addition, its sustained rebuttals clearly reveal internal rifts.
"Where are the so called al-Shabaab leaders like [Ahmed] Godane at this moment when they are most needed to provide [leadership]? Why are the bigwigs delegating their roles to the foot soldiers to deliver calls to action? It can only mean that the group lacks clear leadership," Ngugi said
By Bosire Boniface in Wajir
Posted by Unknown at 4:47 PM