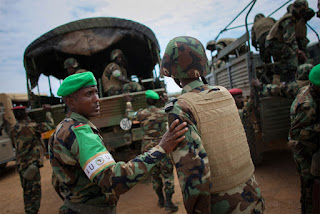 6 March 2013 – The Security Council today extended for another year the mandate of the African Union peacekeeping force in Somalia, as it continues to consider a revised United Nations presence there, and partially lifted the 20-year-old arms embargo imposed on the country.
In a unanimously adopted resolution, the Council also requested Secretary-General Ban Ki-moon to continue the UN logistical support package for the AU Mission in Somalia (AMISOM), which will continue its tasks until 28 February 2014.
Created and operated by the AU in January 2007, AMISOM received a UN mandate from the Security Council the following month, and has been renewed ever since. It is mandated to conduct peace support operations in Somalia, which has been affected by conflict for more than two decades but which has recently made some significant political gains.
In today’s resolution, the Council also partially lifted the weapons ban for one year to boost the Government’s capacity to protect areas recovered from the militant group Al-Shabaab and defend against fresh attempts by such groups to destabilize the country.
It decided that the arms embargo, originally imposed in 1992, would not apply to arms or equipment sold or supplied solely for the development of the Government’s security forces, but it kept its restrictions in place on heavy weapons, such as surface-to-air missiles.
In addition, the Government would be required to notify the Council’s sanctions committee at least five days in advance of any such deliveries and provide details of the transactions. Alternately, Member States delivering assistance may make the notification after informing the Government of its intentions in that regard.
The resolution also welcomed the review by the Secretary-General of the UN’s presence and engagement in Somalia which includes the UN Political Office for Somalia (UNPOS) and the UN Support Office for AMISOM (UNSOA).
Discussions are under way on a revised UN presence in Somalia to support recent political gains and to address the urgent ongoing humanitarian and human rights situations. The new mission would include good offices, advice and assistance on security, peacekeeping and state-building, the preparation of elections, human rights and the rule of law, and assistance for the coordination of international assistance.
The 15-member body “agrees with the Secretary-General that UNPOS has fulfilled its mandate and should now be dissolved, and further agrees that UNPOS should be replaced by a new expanded special political mission as soon as possible.”
It also agreed with the Secretary-General that “the conditions in Somalia are not yet appropriate for the deployment of a United Nations peacekeeping operation,” and requested that he keeps this under review, including through the setting of benchmarks for when it might be appropriate to deploy a UN peacekeeping operation.
Meanwhile, the Council decided that UNSOA shall be integrated within the framework of the new UN mission, with the head of UNSOA continuing to report to the Department of Field Support (DFS) on the delivery of the AMISOM logistical support package.
Posted by Siad barre at 4:47 PM