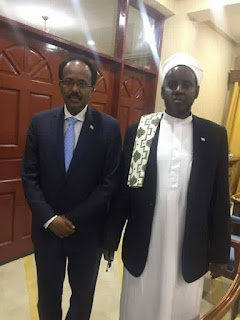 The moderate Islamist group Ahlusuna wal Jamaa has indicated its willingness to work with the Federal Government but maintained unwillingness to cede ground for established Federal States in central Somalia.
In an exclusive interview with terror free somalia blog Mohamed Shakir Hassan the group’s leader for the so called Central Regions territory said they were ready to work with President Mohamed Farmaajo’s administration but on condition they are regarded like any other regional administration.
“We do not have any problem with the current administration. Our issue was with former president Hassan Sheikh Mohamud who brought an administration which had nothing to do with the people of Galmudug. He came with his supporter and violated the constitution by allowing the formation of a state from one and half regions,” said Hassan.
Galmudug state formed in 2015 is made up of Galgadud region and the southern part of Mudug. The Provisional constitution notes two or more states can join to form a state. Ahlusuna walked of the state formation conference in April 2015 and has since occupied the Dhuusamareb, the supposed administrative capital for Galmudug state.
The 43 year Hassan who says is now pursuing a PhD in political science from Ahqaf University in Yemen claims Ahlusuna’s territory straddles the central regions to cover Mudug, Hiiran and Galmudug. Alhusuna is however primarily based in Dhuusamareb.
Asked how possible it is that a small group made up of two communities could claim stake of three regions, Hassan dismisses it as fabrication of the media. “That is how the media makes people believe. As you can see even the man who organized the interview for you is an MP in my administration but comes from a different clan outside Dhuusamareb.”
Ahlusuna wal Jamaa fought alongside Somali forces in driving out Al-Shabaab from parts of central Somalia but fell out with the government over what it termed as exclusion despite efforts at pacifying the region.
Hassan is not open to the idea of discussing his troop numbers but says ‘they are enough to control the three regions and were strong enough to finish Al-Shabaab’. As to the sources of funding for the group, Hassan states “We get money from supporters of the Alhusuna liberation and our administration is supported by all in Galmudug, Alhusuna, Himin and Heeb and consists of Mudug, Galgadud and Hiiraan.”
Himin and Hebb existed alongside Galmudug before 2014 but joined together to form Galmudug state.
During his meeting with President Farmaajo, Hassan says they did not discuss the Galmudug issue but instead focused on efforts to fight Al-Shabaab. The leader who could not see eye to eye with former president Hassan Sheikh Mohamud attended President Farmaajo’s inauguration in what was seen as a sign of better relations with the new administration.
But Hassan is categorical that Alhusuna fighters will not surrender their weapons to the government. “We will not give out our weapons. Alhusuna is just like any other region and the government must deal with us as a regional state,” said Hassan. He assured humanitarian agencies however of free movement noting they restricted movement in the past because of the bad relations with Hassan Sheikh Mohamud’s administration.
On his group’s relations with Ethiopia, Hassan observes, “we enjoy good relationship with Ethiopia just like we do with the new government.”
Posted by Unknown at 6:44 AM