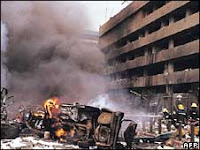 (WASHINGTON) — The case to implicate Sudan and Iran in the 1998 Nairobi embassy bombings, announced by a US legal firm on July 29, could benefit some 308 Kenyans – but even if the victims win the case, it likely will be years before they are compensated with seized Sudanese and Iranian assets.

US Embassy in Nairobi after the attack of August 7, 1998
"In the latter part of the Clinton years and also the Bush years, there’s been a reluctance on the part of the US government to allow recovery in these lawsuits," said Jeffrey Addicott, the director of the Center for Terrorism Law at St. Mary’s University School of Law in Texas. "In the vast majority of cases the Bush administration has blocked recovery, through the Justice Department, of the plaintiffs getting at these assets."
Mann and Mairone, the legal firm representing the 308 Kenyans who were embassy employees or their families at the time of the attacks, filed two separate lawsuits August 5 and 6 in a Federal District Court in Washington, D.C., seeking a total of $40 billion. "In a simple way, those profiting or financing terrorism should at least pay the victims monetary compensation for the damages caused by the terrorists," said Gavriel Mairone.The case will be tried under a provision of the National Defense Authorization Act of 2008, which gives US courts jurisdiction in cases in which money damages are sought against a foreign state for supporting the killing or injury of US government employees in instances of torture, extrajudicial killing, aircraft sabotage, or hostage taking.There were 32 Kenyan Foreign Service Nationals killed in the 1998 Nairobi bombing. 247 people were killed and 5,000 wounded in the Nairobi and Dar Es Salaam attacks. Mann and Mairone allege that the defendants — the Republic of Sudan, the Islamic Republic of Iran and various security organs of those states — gave "sanctuary, technical assistance, explosive devices and training" to al-Qaeda. ,more..http://www.sudantribune.com/spip.php?article28248
Posted by Unknown at 4:36 PM