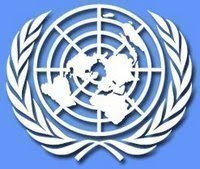 UNITED NATIONS, Aug 19 (Reuters) - The U.N. Security Council authorized on Tuesday an African Union force in Somalia for another six months, a day after Somalia's government signed a peace agreement with some opposition figures. A unanimous resolution also asked U.N. Secretary-General Ban Ki-moon to work with the AU to strengthen U.N. logistical, political and technical support to help bring the African Union Mission in Somalia, or AMISOM, up to U.N. standards. Somalia has been mired in anarchy since warlords overthrew a dictator in 1991. The waters off the Horn of Africa country are considered among the most dangerous in the world for shipping because of rife piracy. The peace agreement, which was initialed on June 9 in Djibouti and signed on Monday, has been rejected by hard-liners and done little to quell violence more..http://www.alertnet.org/thenews/newsdesk/N19296145.htm
Posted by Unknown at 9:47 PM