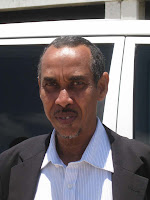 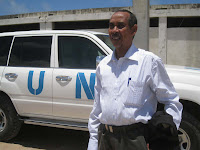 MOGADISHU, Aug 27 (Reuters) - Somali gunmen released the local head of the U.N. refugee agency in Mogadishu on Wednesday after holding him captive for more than two months, security sources said.
"Hassan Mohammed Ali, the head of UNHCR, was freed on Wednesday afternoon," a U.N. staff member told Reuters. "He was kidnapped on June 21 and held until today when he was released unconditionally. He is in perfect health."
Abductions are common in the lawless Horn of Africa nation, where an interim government and its Ethiopian military allies have been battling Islamist insurgents since the start of last year.
A Canadian freelance journalist and an Australian freelance photojournalist were kidnapped on Saturday in the same area where Ali was seized, in Elasha, southwest of the capital. (Reporting by Abdi Sheikh and Ibrahim Mohammed; Writing by Wangui Kanina)
Posted by Unknown at 11:40 AM