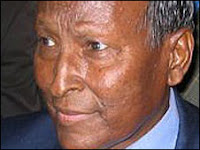 Somali insurgents al shabaab have attacked the president's convoy as he was preparing to leave for Ethiopia to attend talks to resolve a rift in the government. Reports say the insurgents detonated two landmines near the convoy. President Abdullahi Yusuf and Premier Hussein Nur Adde are to hold face-to-face talks in an attempt to end differences between the two leaders. There are fears that the rift could affect a ceasefire agreement signed with the opposition in June more..http://news.bbc.co.uk/2/hi/africa/7562845.stm
Posted by Unknown at 12:35 PM