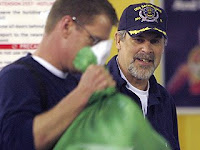 JERICHO, Vt. — A U.S. cargo ship captain who spent five days as a hostage of Somali pirates gave thanks Saturday to his community for a hero's welcome a week after returning home.
Maersk Alabama skipper Richard Phillips addressed a crowd of about 500 people at a homecoming picnic in Jericho, Vermont, near Underhill, where Phillips lives.The 53-year-old mariner gave thanks to the U.S. military, his family, and his neighbors. He told the crowd: "This is a true American community, and a true caring for each other."
Phillips and his wife, Andrea, say they're grateful for the many letters of support they've received.The event featured live music from local bands, and Vermont's governor declared the day "Captain Richard Phillips Day."Click here for photos.Phillips will testify this week before a U.S. Senate committee about his ordeal. He's scheduled to speak on Thursday, according to the Burlington Free Press.Shane Murphy of Seekonk, Mass., the first mate on the Maersk Alabama ship, also will speak to the Senate Foreign Relations Committee...more..http://www.foxnews.com/story/0,2933,517903,00.html
Posted by Unknown at 12:01 PM