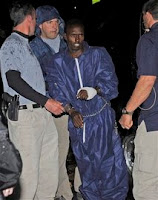 NEW YORK – When U.S. prosecutors brought piracy charges against a teenager from Somalia, they dusted off a law that has been on the books since George Washington was president and used only sparingly since then.The law's obscurity, the lack of recent precedent and murky definitions of what constitutes piracy could present challenges to law enforcement. But prosecutors also boosted their case with more common nonpiracy charges that could lead to a long prison sentence, even if the piracy count doesn't stick.The government "threw pretty much everything they had at this guy because I think they wanted to hedge their bets," said Eugene Kontorovich, a professor at Northwestern University Law School.In a criminal complaint, prosecutors depicted Abdiwali Abdiqadir Muse as the brazen ringleader of a band of four pirates who bullied 20 crew members of an American-flagged cargo ship, fired a shot at the captain and boasted of hijacking other ships. They said he executed the maneuver like a veteran pirate, stealing $30,000 from a safe and demanding that the crew give him the phone number of the ship's owner...more..http://news.yahoo.com/s/ap/20090422/ap_on_re_us/us_piracy_suspect
Posted by Unknown at 6:48 PM