'Sons of Somalia' at Sea? Not So Fast 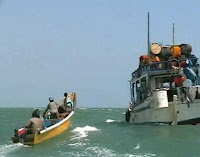 Days after the Dutch navy's "catch-and-release" of Somali pirates, the European Union is hosting a meeting in Brussels to tackle the piracy issue. And the organizers want the international community to pony up funds to bolster Somalia's internal security.
Reuters reports from Brussels that the UN has forwarded a 100-day, $165 million plan to help Somalia's fragile transitional government build a working security force. And Somali Foreign Minister Mohamed Omaar tells the Associated Press his country needs financial help to pay for a coast guard to fight pirates.
At first glance, it looks like naval blogger Galrahn's "Sons of Somalia" idea. As you'll recall, Galrahn suggested that training up a 2,000-man Somali coast guard and a 400-man officer corps and buying a 30-vessel fleet would cost of around $130.2 million annually -- a bargain when weighed against disrupted commerce, ransom payouts and rising insurance premiums.
But as the Associated Press reports, most of the donor nations attending the conference have thus far concentrated on land forces. The European Union is pitching in 60 million euros (about $77.5 million), but European Commission President Jose Manuel Barroso said the idea was to "help Somalia from within."
Meanwhile, the U.S. government is also weighing its options. Among other possibilties, the United States is looking at providing assistance to Somalia's semi-autonomous Puntland state and sponsoring the transitional government's security force. http://blog.wired.com/defense/2009/04/somalia-pol-ple.html
Posted by Unknown at 6:20 PM