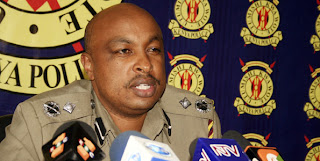 Kenya police spokesman Eric Kiraithe told the BBC that Mr Farah was mistakenly freed by an officer who thought he was an illegal immigrant. Photo/FILE By DOMINIC WABALA

Posted Wednesday, March 24 2010 at 20:21
A terror suspect who escaped from police custody in Busia at the weekend is believed to be a major fund-raiser for Somalia rebel group al Shabaab.Mr Hashi Hussein Farah travels around the world raising funds for the insurgents fighting to topple the Mogadishu government and said to have links with Osama bin Laden’s al Qaeda, security sources said on Wednesday.The Australian passport holder was intercepted at the Busia border point by Kenyan Immigration officers on March 9 and handed over to police.But he disappeared four days later when he was scheduled to be taken to Nairobi for interrogation by the Anti-Terrorism Police Unit.
He is reported to have been among the masterminds of a terror attack plot in Australia in 2009. The Australian High Commission in Kenya could not be reached for comment.According to an Australian newspaper Brisbane Times, the Australian Department of Foreign Affairs and Trade declined to give any information on Mr Farah’s whereabouts as did the Attorney General’s Department, responsible for intelligence and security.Kenya police spokesman Eric Kiraithe told the BBC that Mr Farah was mistakenly freed by an officer who thought he was an illegal immigrant. Mr Kiraithe said the fact that he was handed over to ordinary police instead of the counter-terrorism police was “an oversight.”“He was handed over to ordinary duty policemen and they were not given the full information. The matter is still under investigation,” Mr Kiraithe said. And in Mombasa, four terror suspects were arrested shortly after landing at Moi International Airport on Tuesday. The men, three of them with United Arab Emirates passports and the fourth, an Omani, one were seized by the Anti-Terrorism Police Unit and taken to the unit’s base for questioning.
Not verify
On Wednesday, the four were driven to Moi International Airport but Nation could not verify which flight they were placed on as journalists were barred from the check-in area by security. It could also not be immediately ascertained whether they were flown to Nairobi or deported, as some sources claimed.
reporting by Anthony Kitimo
Posted by Siad barre at 6:58 PM