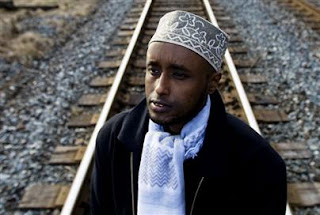 TORONTO -- Mohamed Abdullahi Mohamed works as a security guard at an apartment complex in Toronto's Little Mogadishu neighborhood. It can be a slow job, sitting at the gatehouse, but nobody could call him inexperienced,Before he returned to Toronto last year, last year, the 35-year-old Canadian spent six months with the Somali militant group Al-Shabab. He trained at Al-Shabab's main camp in Mogadishu and guarded the frontlines."To us, the local people, they were freedom fighters," Mr. Mohamed said of Al-Shabab. "They were fighting for our country, they were fighting for the survival of the Somali race, and everyone rallied behind them."Vic Toews, the Public Safety Minister, announced last week that the government had added Al-Shabab to Canada's list of outlawed terrorist organizations. He said the al-Qaeda-linked group was "actively recruiting within the Somali-Canadian community." Police and intelligence officials are investigating a half-dozen young Canadians suspected of having joined the militant group. A video posted on the Internet this week claimed one of them, Mohamed Elmi Ibrahim, had died "in battle."Mr. Mohamed, who immigrated to Ontario in 1989, is believed to be the first Canadian to speak publicly about his time with Al-Shabab. He told his story to the National Post in exclusive interviews in Mogadishu and Toronto.

He is in the early stages of forming a non-profit organization called Generation Islam, which will steer Somali-Canadians away from radicalism. He wants the government to contribute funding. No such program currently exists in the Somali community."I think this will be an initiative which can really make a difference," said Mohamed Gilao, executive director of Dejinta Beesha, a Toronto-based settlement services organization that works with the Somali community.Ahmed Hussen of the Canadian Somali Congress said the fact that just six Somalis are suspected of having joined Al-Shabab suggests that only a small minority are buying into extremist ideology. "It's not pervasive, however one is too many."Mr. Mohamed said his priority is to "help de-radicalize these young kids who are being brainwashed ... to tell these young kids that there is another way. You can be a patriot, but you don't need to be a terrorist."He said he fears what could happen in Canada if nothing is done. At the same time, Somalia does not need more gunmen, he said. It needs educated Canadian Somalis to help rebuild the country after three decades of wrenching war.