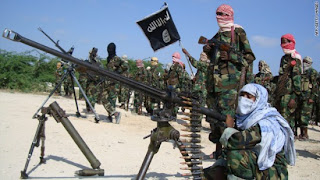 MOGADISHU, Somalia, Aug. 1 (UPI) — Somali militant group al-Shabaab has received a cache of weapons in preparation for an assault to coincide with the holy month of Ramadan, a source said.
Al-Shabaab has declared war on the African Union’s peacekeeping mission in Somalia. The transitional government in Mogadishu is struggling to exert control over a country dominated by the terrorist group, an affiliate of al-Qaida.Sources in the African Union told CNN that al-Shabaab had hundreds of fighters staged outside the Somali capital in preparation for a Ramadan assault.Monday marks the start of the Muslim holy month.Sources to CNN said al-Shabaab may have received a shipment of weapons from its Yemeni allies in preparation of the Ramadan assault. H/T conservatweet
Posted by Unknown at 8:09 PM