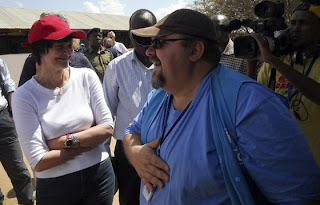 Calmy-Rey visited the Dadaab refugee camp and was shocked by the dire situation in the famine-stricken Horn of Africa (Reuters)
This week’s visit by Swiss President Micheline Calmy-Rey to famine-hit East Africa sends a strong signal to other countries and the public, in a senior expert’s view. 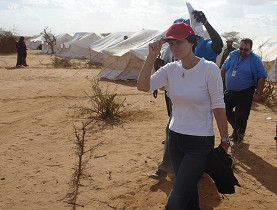 Interviewed by swissinfo.ch, François Nordmann, a policy advisor and retired Swiss diplomat, dismisses critics who accuse Calmy-Rey of staging the event for the media.During her three-day trip to Kenya, Calmy-Rey visited the Daddab refugee camp, which houses an estimated 400,000 people, some 100 kilometres from the Somali border.On Thursday she met Kenyan President Mwai Kibaki, who called on the international community to intervene over the drought and the Somalia security issue.Calmy-Rey is the first president of a western country to travel to the disaster region in the Horn of Africa where up to 12 million people face starvation.“More than 1,300 people arrive in the camp every day. Often they are in poor health and have no belongings,” she told Swiss television on Wednesday.Calmy-Rey, who has visited other crisis regions in Africa during her nine years as Swiss foreign minister, said she was considering how Switzerland could boost its aid to Africa. 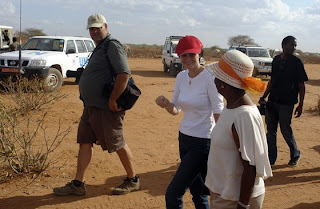 swissinfo.ch: How is such a visit seen by other governments?

François Nordmann: It is not only a strong signal to other countries but also to the wider public. As foreign minister Calmy-Rey is also in charge of Switzerland’s development and humanitarian aid.Several international organisations, including the United Nations and the High Commissioner for Refugees are trying to mobilise countries to help alleviate the dramatic situation.Calmy-Rey’s visit can only help raise awareness of the humanitarian disaster underway in the region.

swissinfo.ch: Does such a visit have a concrete impact on the organisation and provision of humanitarian aid?

F.N.: President Calmy-Rey put it like this: The visit was the chance to form an impression of the situation on the ground.
Switzerland has already contributed more than SFr14 million ($18 million) in aid for the victims of the crisis. The visit to the camp is perfectly legitimate because it allows an assessment of the impact of Swiss aid so far. It will also be helpful to organise it in the most efficient way possible.

swissinfo.ch: What is the likely impact on Switzerland’s foreign policy?

F.N.: She could decide to use her first-hand experience in talks with her counterparts from other countries and with the United Nations.
No doubt the crisis in Africa will be tabled for the next meeting of the UN General Assembly.
But the visit was also an opportunity to strengthen bilateral relations between Kenya and Switzerland.

swissinfo How justified is the criticism by rightwing politicians in Switzerland that the visit is a mere media stunt and the problem of immigrants from North Africa should be the political priority at home?
F.N.: It reminds me of the criticism levelled against the first visit by a Swiss foreign minister to the African continent back in 1979. The rightwing conservatives at the time argued the visit did not serve the economic interests of Switzerland and there were other political priorities.It is the same kind of thinking by today’s political opponents. They resort to indirect criticism as it is difficult to come out openly against a humanitarian aid effort.swissinfo.ch: To what extent does Calmy-Rey’s trip also have a domestic policy dimension in the run up to the parliamentary and cabinet elections later this year?
F.N.: I don’t think her diplomatic initiative will gain her extra votes in Switzerland. Calmy-Rey acted in her capacity as Swiss president and foreign minister in charge of development aid, not as a member of the Social Democratic Party.Considering the amount of financial pledges made to the [Swiss Broadcasting Corporation] fundraising organisation, Swiss Solidarity, it seems that Swiss citizens share the humanitarian concerns of the Swiss president
Via -Abdirahman Warsame
terror free somalia Pics
Posted by Unknown at 4:09 PM