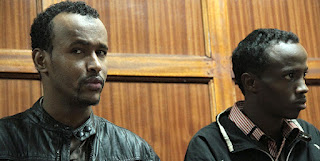 UPDATE ON Terror suspect shocks court with guilty plea. Suspect: I am an Al Shabaab


A Kenyan court sentenced a Somali national to 59 years in jail on Thursday after he confessed to being a member of the al Qaeda-linked al Shabaab rebel group following his arrest in the capital Nairobi last week.East Africa's biggest economy has been on a heightened state of security since sending troops into Somalia to crush al Shabaab, an Islamist group which carried out a double suicide bombing in neighboring Uganda in 2010.Abdimajid Yassin, 26, was arrested last Friday when police seized a cache of explosive-laden vests, grenades and automatic rifles in an apartment in the Nairobi's Eastleigh district.Yassin pled guilty to 10 counts of possession of explosives, ammunition and illegal possession of firearms. There was also a charge of engaging in organized criminal activity and one of being in Kenya illegally.A second suspect arrested in the raid pleaded not guilty to the same charges.Earlier this week police said they believed Yassin intended to carry out a suicide bombing but provided no further details.
"I have considered the interest of the country and national security of the state ...the accused is not remorseful and I convict him on his own plea of guilty," Magistrate Lucy Nyambura told the court.
Western embassies in Kenya have warned of potential attacks several times in the last nine months.

Suicide bombings in Uganda's capital Kampala in July 2010 which killed 79 soccer fans watching the World Cup final were al Shabaab's first on foreign soil and highlighted both their intent and capability to strike beyond Somalia's borders.

Hundreds of disenchanted Kenyan Muslims and Muslim converts have been lured into the ranks of al Shabaab since its militants launched their insurgency in Somalia five years ago.
Posted by Unknown at 11:44 AM