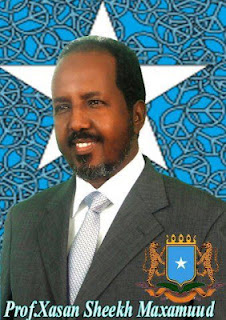 Somalia’s newly elected President Hassan Sheikh Mohamoud has been sworn in immediately after he was declared Monday’s presidential election in Mogadishu.

Mr. Mohamoud, the president elect is an academic who obtained a diploma from Mogadishu’s National University in 1981.He defeated incumbent president Sharif Sheikh Ahmed who has been in power since 2009.Mohamoud garnered 190 votes out of the 269 votes cast while his rival Sharif Sheikh Ahmed got 79 votes.

Mohamoud attended Bhopal University in India, where he earned a Master’s Degree in 1988 and worked as an education officer for UNICEF in the central and southern parts of the country from 1993 to 1995.

The former Dean of Mogadishu’s Simad University entered Somali politics in 2010, when he established the independent Peace and Development Party (PDP) where party members unanimously elected him as the party’s chairman in April 2011, with a mandate to serve as leader for the next three years.

Mohamoud was unanimously elected the president of Somalia in a hotly contested presidential election held in Mogadishu for the first time in 21 years.

Today’s election is the first in two decades for Somalia election to take place on Somali soil, a sign that many Somalis and the international community attribute it to the military gains made by the Somali and African Union force in the capital, Mogadishu.

Ahmed said that he was happy to see democratic elections taking place inside Somalia in 42 years.

He praise the Somali and the African Union forces for enabling the country to hold democratic elections in Mogadishu, a city that has been described as the world’s most dangerous place.Mr. Ahmed promised to work with the new president and expressed his willingness to give the necessary advice the incoming president may need in running the affairs of the country.