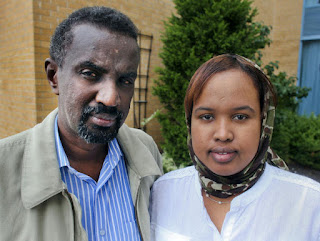 Ahmed Abdisalam Adan and his wife Falastine Iman have both worked as journalists in Somalia and narrowly escaped death in separate terrorist attacks.

Ahmed Abdisalam Adan is a survivor and despite nearly dying in a suicide bombing that killed two of his friends, the Somalia-born Canadian considers himself one of the lucky ones.“I’m alive,” he says in his first interview since the May 1 attack in central Somalia, his red and watery eyes the only visible reminder of the injuries he suffered when shrapnel tore through his body. “I’m not surprised it happened. I wasn’t expecting it but I wasn’t surprised.“At some point,” he says. “You don’t look for the logic, you just thank God you’re alive.”This has been the reality for years for those on the front lines in Somalia — a country that may finally be on the road to recovery with last week’s election of a new president after two decades of chaos, corruption, conflict and internationally-appointed governments that failed to bring peace.Adan, a former journalist who co-founded the media company HornAfrik, was a member of Somalia’s transitional parliament when he was targeted in the bombing. His delegation was visiting the region of Dhusamareb when a suicide bomber rushed toward them, killing seven, including two MPs.Al Shabab, the Al Qaeda-affiliated group that claimed responsibility, is at its weakest since its rise to power in 2007. But what the organization lacks in support or territory hasn’t stopped its targeted assassinations of political leaders and journalists, or the deaths of civilians killed in large-scale bombings.
“It’s difficult to guard yourself against someone who wants to die,” says Adan. “This is the phenomenon of this war.“And at the end of the day this is the tragedy of this — young boys are killing themselves without knowing why, without understanding, without planning it themselves.”With burning metal embedded in his stomach and head, Adan was airlifted to neighbouring Ethiopia for emergency surgery, then transported to Washington and finally to Toronto, where he is undergoing treatment at Sunnybrook Hospital for lingering ear and eye injuries. For Adan, there is no time spent pondering “why me” and “what if” scenarios. He is pragmatic and positive about Somalia’s future. The only dark moments come when he thinks about the past and is overwhelmed by the loss of friends and colleagues.,,,more ..read