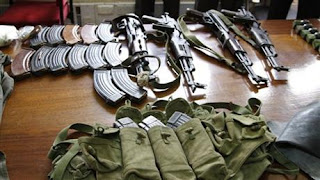 Kenya Police Spokesman View Eric Kimathi speaks to journalists in Nairobi, Kenya, Friday, Sep. 14, 2012. Kenyan police they have arrested two people suspected to have links with an al-Qaida-linked Somali militant group that was in the last stages of planning a major terrorist attack on Kenya. Boniface Mwaniki , the head of Kenya's Anti-Terrorism Police Unit, said Friday that police found four suicide vests, a cache of weapons and 12 grenades(AP Photo/Khalil Senosi)


NAIROBI, Kenya (AP) — Kenyan police disrupted a major terrorist attack Friday in its final stages of planning, arresting two people with explosive devices and seizing a cache of weapons and ammunition, officials said. A manhunt has been launched for eight more suspects including would-be bombers and the masterminds behind the planned attack, police spokesman Eric Kiraithe said.The pair was arrested in an area of Nairobi where many Somali immigrants live, said Boniface Mwaniki , the head of Kenya's Anti-Terrorism Police Unit. He said the men are suspected of having links with al-Shabab, an al-Qaida-linked militant group in neighboring Somalia.Police found four suicide vests rigged with hundreds of metal ball bearings, two improvised explosive devices, also rigged with ball bearings, four AK-47 assault rifles, ammunition and 12 grenades, he said, adding that the vests are similar to that one used in attacks in Uganda on crowds watching the soccer World Cup final on TV in July 2010, killing 76 people, Mwaniki said.
Kiraithe identified the two suspects in custody as Abdul Majid Yassin Mohammed, 26, a Kenyan of Somalia origin, and Suleiman Abdi Aden from Somalia. The total weight of explosives used in the vests was more than 40 kilograms (88 pounds) which can have devastating effect and can be detonated remotely if the suicide bomber develops cold feet before setting off the explosion, he told a news conference.Al-Shabab claimed responsibility for the bombings in Uganda, saying it was in retaliation for Uganda's participation in the African Union's peacekeeping mission in Somalia. Al-Shabab has vowed to carry out terror attacks in Kenya after the country sent troops into Somalia in October to fight the militants.Thus far, the reprisal attacks have come in the form of grenade attacks that have killed more than 50 people. Police have attributed them to sympathizers of al-Shabab in Kenya. Analysts have warned that al-Shabab could be planning a large-scale attack such one using a truck bomb.
Posted by Siad barre at 2:47 PM