Al-Shabaab Leader Given a Death Sentence in Absentia 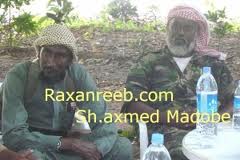 Ahmed Abdi Godane "Abu Zubeir" with Ahmad Madobe
A court in Puntland has passed a death sentence against Ahmed Abdi Godane "Abu Zubeir", the leader of Al-Shabaab, for his role in masterminding the assassination of Sheikh Ahmed Hajji Abdirahman in Bosasso. Sheikh Ahmed was assassinated on December 5, last year outside a mosque in Bosasso, shortly after attending Morning Prayers in the mosque. A commission of inquiry concluded Al-Shabaab was responsible for the killing.
Seven alleged militants were arrested at the end of the year in connection with the assassination and were also tried on charges of involvement in the killing. Announcing verdicts on Wednesday (February 27th) the Judge said some of the suspects had pleaded guilty to the charges; others were also found guilty as charged based on the evidence produced in court. All the accused received death sentences.
In June last year, the US offered a US$7million reward for information on the whereabouts of Ahmed Godane as well as up to US$5 million of information about other Al-Shabaab leaders including Ibrahim Haji Jama, Fuad Mohamed Khalaf, Bashir Mohamed Mahamoud and Mukhtar Robow.
Posted by Siad barre at 5:50 PM