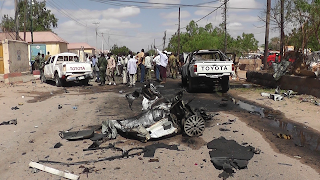 more pics
MOGADISHU: Somalia’s Shebab insurgents said Monday they carried out a suicide attack using a car bomb targeting senior police officials in the central Galkayo region, killing at least four people.
“There are at least five people dead, including the bomber,” said Mohamed Abdullahi, a police officer in the town, which straddles the border between the northern breakaway state of Puntland and the self-proclaimed region of Galmudug.
Security sources said that a senior Puntland police official was wounded in the blast, but the reports could not be independently confirmed.
“The mujahedeen have today carried out a martyrdom operation in Galkayo, targeting senior Puntland officials,” the al Qaeda-linked Shebab said in a message posted on their Twitter account.
The Shebab claimed that six soldiers were killed and nine were wounded in the blast, the latest in a string of attacks in the region, where tensions are high between rival political and clan groups.
Shebab insurgents also operate in the wider area, and have carried out a series of guerrilla style attacks, but have tended to target mainly the capital Mogadishu.
Newly elected President Hassan Sheikh Mohamud, who took office in September after being chosen by the country’s new parliament, faces multiple challenges in efforts to restore peace to the war-torn Horn of Africa nation.
Large parts of the country has been carved up by rival militia forces who have developed autonomous regions that pay little if any heed to the weak central government in Mogadishu.
But Shebab fighters are on the back foot, having fled a string of key towns ahead of a 17,000-strong African Union force, which is fighting alongside Somali government troops to wrest territory from the militants.
Ethiopian troops are also battling the Shebab in the southwest of Somalia.
The Shebab remain a potent threat, still controlling rural areas as well as carrying out guerrilla attacks in areas apparently under government control.
Posted by Siad barre at 2:18 PM