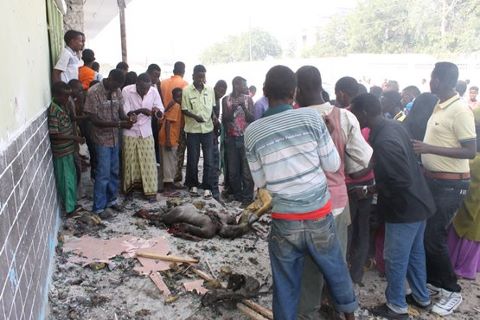 Somali and Canadian security forces are probing whether a former York University student was part of a team of suicide bombers who attacked Mogadishu on Sunday, shattering the capital’s calm and killing and injuring dozens.
Intelligence, police and government sources in Mogadishu and Ottawa told the Star that they were investigating reports that Mahad Ali Dhore was one of the nine Al Shabab militants who stormed the capital’s courthouse Sunday as part of the well-co-ordinated attack, which included a separate car bomb targeting Turkish aid workers.
Dhore’s family could not be reached for comment Sunday and there was no official confirmation of his participation. Somali officials are seeking forensic evidence to determine if the Canadian was involved. .

It was the worst attack in the capital since the Al Qaeda-aligned Shabab was forced to abandon Mogadishu in August 2011.

News of Dhore’s potential involvement puts Canada once again at the forefront of discussions on so-called “homegrown terrorism.”
The RCMP confirmed earlier this month that two Canadians were involved in January’s four-day siege at an Algerian gas plant that killed 37 hostages. Ali Medlej and Xristos Katsiroubas were killed when Algerian troops stormed the compound, their remains identified by DNA.
Mujahid “Ryan” Enderi, one of their friends from London, Ont., is now the subject of an international manhunt, and a fourth Londoner, Aaron Yoon, is reportedly serving a two-year sentence in a Mauritanian prison on a terrorism conviction.
The problem of Al Qaeda organizations luring Western recruits is not new or unique to Canada, and Dhore’s disappearance nearly four years ago, with at least four others, made headlines.
Dhore’s cousin told the Star in a November 2009 interview that the 25-year-old had left his Markham home with his aunt to visit an ailing grandmother in Nairobi, but then disappeared while in Kenya. The cousin said she was baffled, saying “there had been nothing in his behaviour that would have worried us.”
Dhore had been studying math and history at York University but decided to take a break just before he left Canada, his relatives said. A friend of his family said he contacted his sister in the years since, telling her he had gotten married, had children and was living in Somalia.
Shortly after the midday attack Sunday, the Shabab praised its “martyrs,” boasting of the attacks on Twitter: “Above all, today’s operations ought to drive this unambiguous message home: there is no safe haven for apostates in Mogadishu!”
Shabab spokesman Sheikh Ali Mohamed Rage claimed that only five suicide attackers died and vowed more attacks. “This was a holy action which targeted non-believers who were in a meeting within the court complex. We will continue until Somalia is liberated from invaders,” he said, as quoted by the AFP news agency.
Somalia’s Prime Minister Abdi Farah Shirdon condemned the violence, writing on Twitter: “There is nothing Islamic in killing innocent Somalis. It is a tragedy for everyone affected.”
According to witnesses, the assault began around noon Sunday when a suicide bomber blew up the gate leading to the court compound. That began a two-hour gun battle between the attackers, wearing vests packed with explosives, and security forces. Dozens of court officials and civilians hid throughout the courthouse and tried to climb out windows to safety.
Later in the day, a car bomb detonated on the road leading to the airport as a vehicle carrying Turkish citizens passed.
Somalia’s Interior Minister Abdikarim Hussein Guled said that six of the nine militants who attacked the court complex detonated suicide vests, according to The Associated Press. Three others were shot dead during the assault, he said. He said he couldn’t provide an overall death toll that included government officials and civilians. Reports varied from a dozen dead to as many as 34, with dozens more injured.
Somali sources confirmed that two of the country’s most prominent lawyers, Mohamed Mohamud Afra and Abdikarim Hassan Gorod, were among the dead. Afrah was the head of the Somali Lawyers Association and Gorod had recently defended a Somali journalist who was thrown in jail after interviewing a woman who was raped by government forces.
While the attack shocked the capital, there had been warnings. Britain’s Foreign Office issued an alert April 6 stating that it believed “terrorists are in the final stages of planning attacks in Mogadishu.” 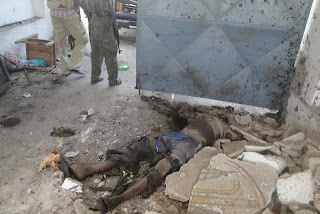 9 al-Shabaab members death
Posted by Siad barre at 9:41 AM