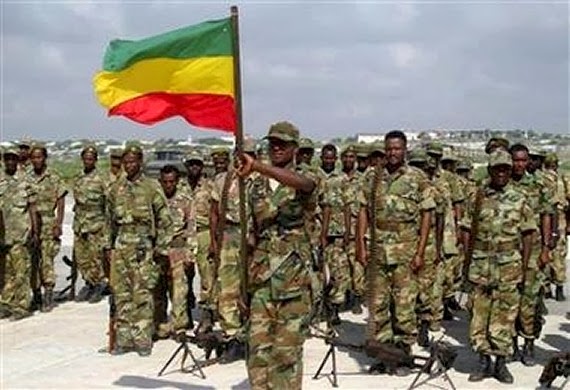 Ethiopia government has deployed hundreds of new troops in Somalia to eliminate al-Shabab from Bay and Bakol regions, officials said on Tuesday.
The troops have today arrived in Baidoa town, the provincial capital of Bay region, establishing a new military bases in the city.
Deputy Governor of Bay Region Shine Moalim Nurow told local media that the Ethiopian troops will assist the government’s plans to root out al-Qaeda linked group, al-Shabab.
Nurow did not provide additional information, but Somali Current Sources say Ethiopian Troops are willing to flash al-Shabab out of Bay and Bakol regions in the first weeks of the New Year.
Reconciliation conference is underway in Baidoa and local elders are expected to form a new regional administration that will rule three regions including Lower Shabelle, Bay and Bakol.
Unknown number of Ethiopian troops was in Somalia over the last three years and Addis Ababa officials said earlier that the troops would only be deployed for a period of time.
Posted by Siad barre at 12:06 PM