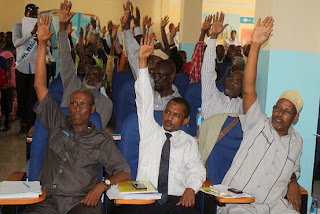 Monday morning; the Somali Parliament in Mogadishu has voted no confidence in the Prime Minister’s claim for Shirdon modesty of his executive, but by refusing to attend the debate and speak in front of the House of Parliament to illustrate the achievements. He was deniedby theChairman Sheikh Mohamed Osman Jowari that has so betrayed the fundamental principles of democracy which the Parliament is a concrete expression and thus demonstrating, in first person, of not being up to the role he plays. The Parliament serves to discuss any matter of interest of the state, but always according to the basic rules of any debate, and first of all to be heard.
What I should have done as a head of state such as President of the Federal Republic Hassan Sheikh Mohamud was present to let him flushed Prime Minister Shirdon to Parliament for the trust. Where it is lacking possibly due to the absence of the support of the President Mohamud,Shirdon would have been forced to resign without any violation of the rules of democracy. Instead, with no confidence in Shirdon’s orchestrated out of the parliamentary debate, collapsed the credibility and reliability of the apical Somali institutions.
The authoritarianism explained on this occasion by the President Mohamud to remove the universal practice of not to impeach any executive in the absence of contradictory was passively accepted by those MPs who  after the vote were lined up at the door of the President to beg the balance of what was agreed .
It’s clear that the entire Road Map has failed through the appointment of parliamentary indicative process by the Elders of the various clans; all Somalia People had the opportunity and hoped to be a Parliament that had at heart and not to be Somalia wallet.
“But the choice of yesterday puts your own risk and the portfolio of Somalia”.
After the arrival of the President Mohamud in Brussels last September, where he was welcomed with an open heart by the leaders of the European Union – last institutional attended by Mohamud , after meetings at the UN, Obama , Turkey, London, and Italy … – there has been a complete turnaround compared to the values ​​cherished by the West.
The journalist who reported the victim rapemade immediately by two men in uniform who are also member staff to the State Radio, the Journalist and reporter of the rape case was arrested as detainee in one of the toughest jail in Mogadishu. In the West, violence against women is one of the most sensitive issues in recent years. Stop a woman who is raped declares a finger in the eye of the democratic world.
They also arrested the director of Radio Shabelle , who released the report of the girl who was raped , and her publisher, now accused of attack on the nation and about to be sentenced for summary . The three arrested are still in isolation and fasting in vain against the injustice they are suffering. The funnypress issue is another outrage to Western values ​​where one is convinced the criticism to help you grow and their refusal paves the way for dictatorship act.
The resigned Governor of the Central Bank that president Mohamoud intended to keep the donations from the international community for Somalia has been under pressure and threats on her safety, while Yussur denounced corruption risks in the entourage of President Mohamud after she submitted a letter of resignation with a impressive details.
Many of the ministerial directors of President Mohamud have long lived in Europe and America. They know very well what are the non-negotiable values ​​of the West, so having them consciously violated veering towards authoritarianism can only belong to a specific field of choice and rejection of international support for democracy in the belief that other donors might support the leadership model of President Mohamud’s .unrealistic illusion.
No support can be just as strong and effective as that of the UN and the Western countries which, facing the wrath of the Deputy Prime Minister and Minister of Foreign Affairs of Somalia Fawzia Hagi Adam, who reproached the EU on non-payment of the aid promised in Brussels.The EU has already responded that aid is there, but is given to the regions that they deserve, likewise Somaliland and Puntland.
The vote that took place yesterday against Shirdon means that the financial support from now on will be only in favor of those areas that offer credibility, reliability and stability. The EU knew the president’s tip to Galgudud and Puntland, UK will continue to support Somaliland, Kenya will support the Jubaland soon … In short, each of the donor region preferring to adopt a more structured and safer ones and the dream of a united and strong Somalia again collapsed, while respecting the regional autonomy, it is definitely gone with yesterday’s vote in the Somalia Parliament. We referred those regions less organized, the most quarrelsome, and the most unreliable, resulting in a two-speed Somalia divaricheranno that because of the hungry appetites of that institutional dress is too wide to be able to wear with the dignity it deserves.
Shukri Said
International Journalist Expert and Human right activist
Posted by Siad barre at 3:09 PM