SOMALIA: Farole is the Right Choice for Puntland 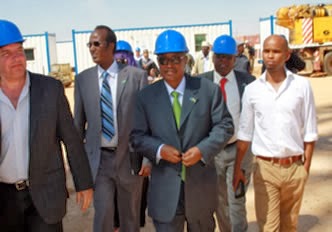 Editorials From Terror Free Somalia View: we support President faroole to be re elected
Contest or without contest, we will have a president early next month. That means the outcome is more important than the response we are getting from the contest. To a certain extent, though, we are being sold to concert tickets for the big match on January 8th. There, the players are individually going to prove their relevance for the top position—the presidency of Puntland. This contest is a winner-takes-all match, where one single man will form the next administration. Love it or hate it, the winner will have a five-year mandate to do whatever he wishes. He can sell the state to Somaliland, at will, if he wants to. This is so because, in politics, no constitutional powers force a president to love us. Therefore, it is crucial that we make a right choice as to whom we entrust with our eggs.
We are at a critical time in our history. The whole nation is in a cute transformation, and it is necessary that we lay the right foundations. And one way of doing so is to put the right man on top. At this point, the question we need to ask ourselves is this: who is the right guy for Puntland today? On paper, the answer to this question may seem simpler; but in practical politics, we need to think outside of the box. Instead of feeling tribal lenience and dependence on the unworkable, we can face the matter squarely. And in my view, this is the right time.
To begin with, Puntland politics was long dominated by qabiil. True, the founders of the state saw the use of qabiil the best choice. They wanted to kick-start the state with the help of qabiil. They had the intention to get rid of it later and set us on the right path. But we made a grave mistake later on. Qabiil became like a virus and did its toll in early 2001 when people fought for control. From that day onwards, every tribe clamed a stake in the system. We reached a point where people—even the laborers—are recruited with tribal recommendations. That is why presidential aspirants are courting tribes for support.
However, I am going to submit that tribal politics will never succeed. And here is my argument. One, the MOU under which the coming elections are to be held does not allow the common folk to vote. Simply put, the public cannot put the man of its choice on top. The Parliament, people’s representative, will do it. Therefore, making big rallies outside Garowe is wasting of time and money. It is like courting a married girl.
Two, the connection between the mass and parliamentarians is non-existence. Because typical politicians seek advantages, there was always, and will be, conflict of interests. Unlike what tribes want, their MPs will go with their interests. That is why most politicians in Garowe are cursed at best. There are those who abstain to visit their constituencies. On the Election Day, therefore, they will vote for a friend who understands their individual situations better than their tribes do. In fact, the majority of the MPs are already in the camp of President Farole. Like the tribes who always send their best man to Garowe but do not get what they want, the opposition candidates are living in great denial. Sirs, the public has no power.
Three, most people in parliament are conservatives and will not buy change. In other words, they will be less likely to vote for a new guy, everything else being equal. That is why the idea of replacing Farole with a freshman is not bankable. From the look of things, it is a no-fight game.
The real question we must ask ourselves, therefore, is this: Is President Farole the right choice for Puntland? Before we answer this question, let us run a quick study on him and see if he still can make it.
President Farole is a consistent politician. Even when he is wrong, he is consistently wrong. He is a straightforward politician who never mistakes inaction for luck. What is more, he is a warrior, determined to achieve his goals. And because lack favors the steady, the doer with the firm end in mind, he is a perfect candidate for the job.
Another quality that sets him apart is his loathing and dislike toward tribal-binding politics. He has the uttermost contempt for clan influences. That is why he distanced many clan leaders, who had been a major roadblock to any imminent progress, from politics in recent years. It is true that some of his closest cronies are smelling qabiil. But in my view, he is using them to his advantage. To eradicate qabiil from our politics therefore, vote for President Farole. One last question for the public: Is it better to be loved or feared? Niccolo Machiavelli answered it and said that it is better to be feared than loved if you cannot be both.
_________________________________________________-
Bashir Ashkir Musse
Managing Director of Somali Academy for Management
ashkireau@gmail.com
Posted by Unknown at 6:08 PM