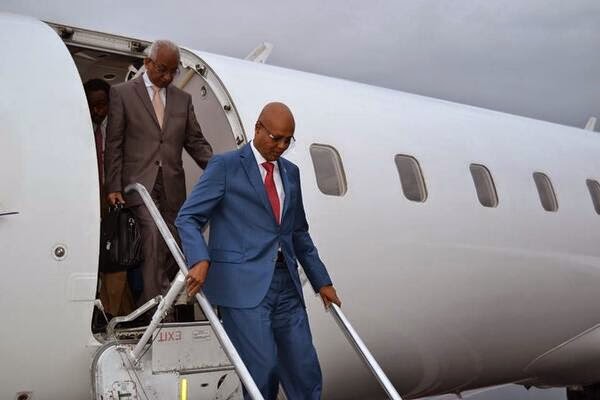 Somali Prime Minister Abdiweli Sheikh Ahmed is in Ethiopian capital, Addis Ababa for second day after he reached there on Monday evening to attend the regional initiative to resolve the crisis in the newly born state of South Sudan. The meeting which started on Tuesday will seek possible alternatives to end the months-long conflict in South Sudan between the President Salva Kir and his former deputy Rayek Machar.
According to a statement released by the Office of Prime Minister Abdiweli Sheikh Ahmed, the Intergovernmental gathering will also give valuable suggestions to the warring sides in South Sudan.
Several ministers accompanied by Prime Minister Abdiweli will also hold special meeting with several ministers from the region to discuss on the issues of Somalia.
Meanwhile, Mediators trying to broker a peace deal for South Sudan issued a stinging rebuke Tuesday of the country’s warring factions, accusing them of seeking military victory rather than a negotiated end to the civil war.
Mahboub Maalim, executive secretary of the East African IGAD bloc that is brokering the talks due to resume Tuesday, said both South Sudanese President Salva Kiir and rebel leader Riek Machar were “stupid” if they thought they could win on the battlefield.
The comments came just hours before Kiir and Machar, whose forces have been fighting it out for six months, were set to hold a rare face-to-face meeting in the Ethiopian capital Addis Ababa.
“Nobody else is to blame other than the parties themselves,” Maalim told AFP.
“If we want to apportion blame it’s theirs, I think sometimes they thought they could win on the ground militarily, something which is very stupid.”
President Kiir and rebel leader Machar are expected to meet Tuesday, their first meeting in a month and only the second since the civil war began. Previous rounds of peace talks, however, have been repeatedly delayed.
Delegates from both sides have been meeting in luxury hotels in the Ethiopian capital since January, but little or no progress has been made with both sides bickering over the agenda and even the venue of discussions.
A ceasefire deal signed by Kiir and Machar on 9 May has been repeatedly violated, deepening the crisis in the young nation which has already killed thousands and forced more than 1.3 million people from their homes. Ethiopian Foreign Minister Tedros Adhanom said both sides were guilty of ceasefire violations.
“The security situation is in a fragile state… if this dire situation in this young nation is not addressed urgently, it’s inevitable that it will cause an untold catastrophic situation,” he told reporters.
Maalim said the latest round of talks will deal with concrete issues including addressing violations of the ceasefire and ensuring humanitarian access, and that regional mediators would be taking a far tougher line.
“It will be much more tangible, much more concrete, and… much tougher than it has been,” he said. “This is something that must come to an end, there is no two ways about it.”
Some of the report are from AFP
Posted by Unknown at 6:55 AM