Somali PM,Ministers, Chief of Staff and Chief of Police had lunch with Ambassador Torun on board 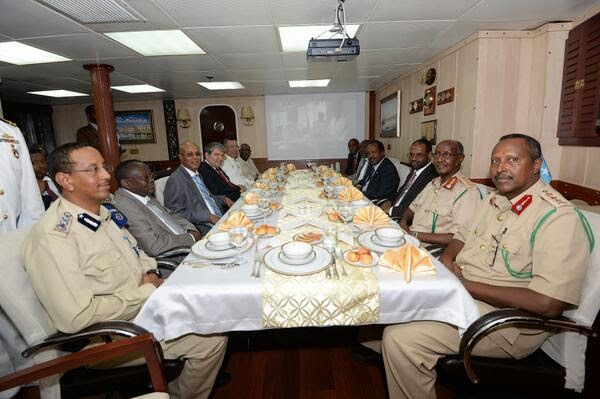 Somali PM Abdiweli Sheikh Ahmed  Today welcomed the Turkish navy ship TCG Gediz to Somalia.
He paid tribute to the significant contribution the Turkish government and people have made to aid and development initiatives in Somalia. 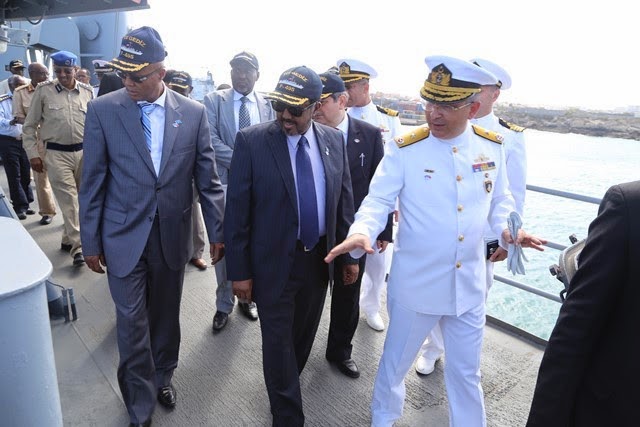 Somali PM acknowledged the long history of friendship between Somalia and Turkey, a relationship that began in the 16th century with ties between the Ottoman Empire and the Adel Sultanate.
“More recently, Turkey has shown remarkable support to Somalia during a time where the world seemed to have forgotten about us. The friendship and support Turkey has shown is something that will be forever cherished,” The pm said.
Turkey, in partnership with the Federal Government of Somalia, has launched various development and infrastructure projects in Somalia, ranging from health and sanitation projects, including the construction of numerous hospitals, to the construction of roads and buildings, and the rehabilitation of Aden Adde International Airport. Through Turkish development assistance, more than 220,000 people have access to clean drinking water. Places of worship have also been restored, and many Somalis are currently being educated in Turkey.
Somali PM thanked the Turkish Government for the recent donation of four coast guard boats to the Somali Armed Forces. Somalia has the longest coastline in Africa, with more than 3,000 kilometres of shore. Protecting the coastline protects Somalia’s security and economic interests and further cements the efforts Turkey has made in helping the Federal Government of Somalia to rebuild the Somali Armed Forces.
In concluding his address, The Pm stated, “We must promote peace in order to live in peace. In the words of the Mustafa Kamal Ataturk ,’Peace at home is peace in the country. Peace in the country, is peace in the world.’ Let us look forward together. The future is bright for us and for our children. For their sake, let us create peace together, first in our homes, and then in our nations.”
Posted by Unknown at 11:01 AM