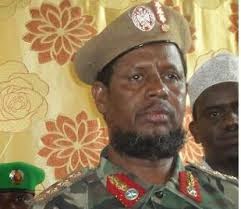 The commander of the Somali National Army (SNA), General Dahir Aden Elmi alias Indhaqarshe, has declared that more than 400 officers in the military were wearing fake ranks.
At a press briefing on Friday, Gen Elmi said that his office wants to correct the anomaly within the force.
“All the wrong ranks were attained by unprofessional people during the years of civil war,” stated the commander. He said that the National Army command discovered the anomalies following investigations.
“The conclusion that 400 fake officers were in the army surfaced following surveys undertaken by a committee established for the purpose,” said Gen Elmi.
He added that he will submit the findings to the ministerial cabinet for endorsement.
In addition, Gen Elmi stressed that the army does not have sub-officers with the rank of inspectors.
“We are training recruits to fill the posts of army inspectors at Jazeera Military Training Camp,” he said without giving numbers.
Annihilating militants
When Somalia’s central government led by the late Gen Mohamed Siad Barre, collapsed in 1991, all the state institutions including the army collapsed.
However, when the rebuilding of the armed forces started, many people wore ranks including those of generals they did not professionally attain.
Successive government leaders during the transitional period (2000-2012) dished out ranks to some people who had no appropriate military or police training.
Gen Elmi added that the Somali National Army in close collaboration with the peacekeepers serving with the African Union Mission in Somalia (Amisom) will soon enlarge the operations against Al-Shabaab, the radical Islamist group.
“We (Amisom and SNA) will soon capture all the territories currently controlled by Al-Shabaab,” proclaimed Gen. Elmi.
He added: “We set up a plan designed to finally annihilate the anti-peace elements.”
The general said the planned operation against the Al-Qaeda-linked movement will clear the group from Somalia for good.
Many countries including Somalia’s neighbours Uganda, Kenya, Ethiopia and Djibouti as well as the European Union and USA have been helping the Somali government to rebuild its security forces including the army.
Posted by Unknown at 12:35 PM