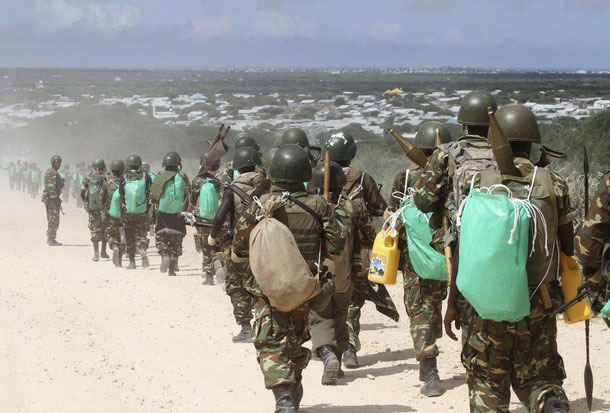 The African Union intervention force in Somalia said it destroyed two camps of the al-Shabaab militant group near the southern town of Badhadhe.
Kenyan and Ugandan forces carried out the Sept. 12 attack on the village of Lagta Berta, the African Union Mission in Somalia, or Amison, said in an e-mailed statement dated Sept. 13. The militants had fled to the area from their stronghold in Barawe, which is the target of an advance by Ugandan troops, according to Amisom.
“Al-Shabaab suffered heavy losses,” Amisom said, adding that the area was “a hideout for the terrorists.”
U.S. forces killed Al-Shabaab leader Ahmed Abdi Godane, 37, in a Sept. 1 raid in southern Somalia, according to the Pentagon. The group is now headed by Ahmed Omar, who’s also known as Abu-Ubeydah. The al-Qaeda-linked militants claimed responsibility for an assault on the Westgate Mall in Kenya’s capital, Nairobi, last year, in which at least 67 people died.
Posted by Siad barre at 3:45 PM