Terror anniversary: eyes off the prize 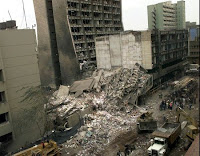 Ten years ago today, U.S. embassies in Kenya and Tanzania were bombed, causing a devastating loss of life and signaling that the United States faced new and more serious terrorist threats abroad and potentially at home.
That potential became a reality on Sept. 11, 2001, when the World Trade Center and the Pentagon were attacked, causing an even more devastating loss of life and sending an even clearer signal regarding the necessity of a smart and focused response to a challenge that could no longer be ignored.
Unfortunately, President Bush did not get the message.
He and his neoconservative advisers decided to launch an unnecessary pre-emptive war with Iraq that has cost 4,000 American lives and roughly 100,000 Iraqi lives, displaced millions, destabilized the Middle East, undermined international relationships and alliances, and left the United States and its allies more vulnerable to new attacks.
Even now, the president who prattles on about his "war on terror" is still missing the point -- and in so doing, he endangers the United States and the world.
As U.S. Sen. Russ Feingold, D-Wis., one of the few leaders in either political party who has read the circumstance correctly from the start, says, "The president (continues) to ignore the devastating impact our massive presence in Iraq has on that country, the region, our counterterrorism efforts, and our economy. Our open-ended presence in Iraq continues to undermine our ability to meet more important national security challenges such as al-Qaida reconstituting itself in Pakistan, the Taliban regaining a foothold in Afghanistan, and other terrorist safe havens in countries like Yemen and Somalia. As we prepare to mark the 10th anniversary of the bombings of the American embassies in Kenya and Tanzania, we must keep our eye on the ball: the fight against al-Qaida and its affiliates
Posted by Unknown at 7:32 AM