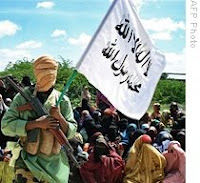 The Obama administration yesterday announced that it will increase assistance of arms and funds to Somalia's government, as it tries to beat back a terrorist insurgency that includes an international who's-who of jihadists, including Al-Qaeda.
It does not exaggerate the stakes in Somalia to say that for the first time in its history, Al-Qaeda is about to have rule over an entire country. The Al-Shabaab, a Somalia-based affiliate of the group, assassinated the country's national security minister on June 18 and currently controls the entire south and large portions of the central parts of the nation, along with parts of the capital. Should the terrorists succeed, they will also have extremist Somali networks in the West to call upon to expand their jihad and support their efforts.
Al-Shabaab and its allies have received extensive backing from foreign countries, the greatest of which is Eritrea, a single-party state with a history of religious oppression and with a recent fondness for rogue states like Iran. Eritrea was accused by the U.N. in June 2007 of secretly providing Somali insurgents with "huge quantities of arms" possibly including suicide bomb belts and anti-aircraft missiles.
Sheikh Hassan Dahir Awyers, the leader of Hizbul-Islam, which is allied to al-Shabaab, is known to have taken safe harbor in Eritrea in the past. Awyers told Reuters in May that Eritrea was supporting his organization, saying "Eritrea supports us and Ethiopia is our enemy--we once helped both countries but Ethiopia did not reward us." The current U.S. Assistant Secretary of State for African Affairs has also said that there are numerous "credible" reports that "the government of Eritrea has, in fact, been supplying weapons and munitions to al-Shabaab."
This seriousness of this threat is greatly compounded by the reach of the Somali networks in the West. Al-Qaeda and its affiliates will not only have a country to themselves, free of any limits or restrictions a host government might impose, but will also be able to draw upon extremist segments in unassimilated Somali communities in Europe and the United States. Already, these segments are causing trouble for those with counter-terrorism duties.,,more..http://www.aina.org/news/20090627035411.htm
Asterpix Interactive Video - Al-Shabaab go for arm and leg: Amnesty International is calling on the Al-Shabab a.. http://tinyurl.com/lcdbol
Posted by Unknown at 2:01 PM