Islamists, TFG war is about the ‘true’ sharia law 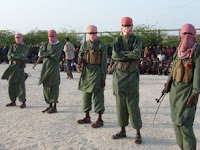 As Al-Shabaab intensified its onslaught on Mogadishu all week, it paraded four teenagers in a public square whom it announced will suffer cross amputation — right hand and left foot cut off — in accordance with Islamic sharia law.
The plight of the teenagers, who were accused of stealing a pistol and three cellphones, signalled the continuing struggle between the militant Islamist insurgents and the transitional Somalia government they want to overthrow over the scope and severity of the sharia law the former have vowed to implement.
When in February newly-elected President Sheikh Sharif Ahmed (himself a moderate Islamist) caved in to rebel demands for Islamic law, he desperately needed to blunt the edge off the Islamist insurgents whose campaigns of law and order were striking a popular chord, especially in southern Somalia.
The Islamists other loud objection to Africa Union peacekeepers being deployed from non-Islamic countries — Uganda and Burundi — had also considerably boxed in President Ahmed....more..http://actdcmetro.wordpress.com/2009/06/29/islamists-tfg-war-is-about-the-%E2%80%98true%E2%80%99-sharia-law/
Posted by Siad barre at 7:51 AM