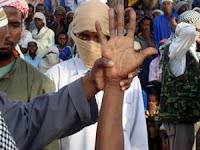 Last week in Somalia, Islamic militants linked to the group al-Shabaab, amputated the arms and legs of four young men accused of theft. The punishment is based on a strict interpretation of sharia, Muslim law that guides personal behavior and morals.
The punishments brought back vivid memories for a 31-year-old resident of Mogadishu calling himself Abdi. He preferred not to give his real or complete name out of fear of repercussion. Ten years ago, a local Islamic court found him guilty of theft, and ordered his arm and leg removed as punishment.
Sharia is based on the Islamic Holy Book, the Koran"It's a very bad and a very sad feeling," he said in an exclusive interview with the VOA Somali Service. "If you lose your hand and foot judiciously, it’s understandable. But if you lose them injudiciously...that haunts me [even today]." In a graphic account of his story, Abdi said that a man he worked for as a driver accused him of looting, stealing and injuring another man, an allegation he adamantly denied. A clan court in northern Mogadishu then condemned him to double amputation, “without sufficient evidence, due process, or nothing,” he said. It was a hot September day in 1999, said Abdi, when he was summoned to an open field, chained in the hands and the legs. A few hours into a “hasty hearing,” Abdi said four men held him to the ground while a masked man cut off his right hand and left leg with a machete. Asked if he was anesthetized to relief the pain, Abdi lamented: “No, not at all. They cut my beloved hand and feet forcefully, and in an excruciating pain.” With no medical attention on hand, Abdi said he almost bled to death before being rushed to a nearby hospital. He was discharged after only one day of treatment. The untreated injuries he still pain him, he said..more..http://www.voanews.com/english/Africa/2009-06-29-voa26.cfm
Posted by Unknown at 8:14 AM