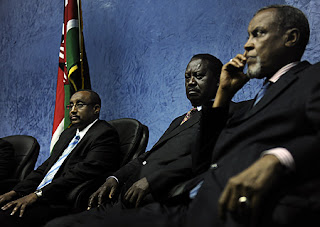 Kenya's hasty invasion of its northern neighbor Somalia took a tragic turn late Sunday when , according to witnesses on the ground, the Kenyan air force bombed a refugee camp sheltering those fleeing Somalia''s famine, killing three children and two adults. A spokesman for the Kenyan military in Nairobi insisted the bombers killed 10 fighters from the Islamic militant group, al-Shabab, and wounded 45 others in the southern Somali town of Jibril; he dismissed reports of civilian casualties as al-Shabab propaganda. But those statements looked doubtful in the light of information from the independent medical aid group Medecins Sans Frontieres which said it was treating victims of the aerial bombardment of a refugee camp near Jibril, an attack which it added its staff had witnessed. "I can confirm five dead and 45 wounded," Gautam Chatterjee, Head of Mission for MSF Holland in Somalia, told Reuters. "In our hospital in Marare, we received 31 children, nine women and five men. All of them of with shrapnel injuries." Though MSF did not specify whose airplanes carried out the bombing, the only bombers known to be operating in the region are Kenya's.

For many, the bombing of a camp housing those who fleeing the world's worst famine will come as tragic, literal proof of the misguided nature of Kenya's military adventure in Somalia. Two weeks ago, Kenya sent anywhere between a few hundred to a few thousand to troops over its northeastern into Somalia in pursuit of al-Shabab, a Somalia-based Islamic group which is fighting the officially recognized government in Mogadishu and its African Union protection force (made up of Ugandans and Burundians). Al-Shabab also has an international capacity: several dozen of its members are Americans and Europeans and last year it killed 76 people in simultaneous bomb attacks on two bars in the Ugandan capital, Kampala. For its part, Kenya took action after the shooting dead of a British tourist, and the kidnapping of two Spanish aid workers and two more tourists (one British and one - who later died - French), all attacks which occurred in the past few weeks near the Somali border and which it blamed on al-Shabab.
(PHOTOS: Collateral crisis — a terrible famine in insurgency-ravaged Somalia.)
From the first, Kenya's action has appeared poorly thought out. Somalia, after all, is not a place to invade lightly. U.N. and U.S. attempts to back a humanitarian operation in 1993 ended in the firefight known as Blackhawk Down, when 18 American soldiers were killed in Mogadishu. An earlier Ethiopian attempt to crush al-Shabab and other Islamist factions in Somalia in 2006 ended more than two years later with Ethiopia withdrawing after a bloody occupation that seemed to only embolden al-Shabab.Read more:
Posted by Unknown at 11:52 AM