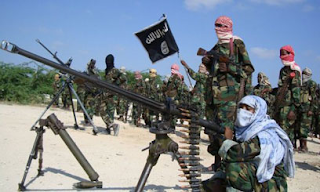 DADAAB, Kenya, Oct 18 – Two Britons are among 12 suspects arrested near the Kenya-Somalia border on suspicion of having links with Islamist militant group Al Shabaab.Police said they arrested the two British men as they tried to cross the border into Somalia on Sunday afternoon while 10 people of Somali origin were arrested at the Dadaab refugee camp on Tuesday.“It is true that we are holding two Britons on suspicion of terrorism activities. They were arrested on Sunday afternoon,” a police source with knowledge of the arrest said. He said the men were briefly held at police stations in North Eastern Province before they were handed over to the Anti Terrorism Police Unit for further interrogations. “I don’t know where they are being held now.”“They are being interrogated to establish if they are linked in any way with Al Shabaab,” the source added.North Eastern Provincial Police chief Leo Nyongesa later told Capital News they had picked up 10 people who are suspected to have links with the Al Shabaab militant group from the refugee camp.“This is part of security measures we have put in place and we have arrested 10 people today [Tuesday],” Nyongesa said on telephone from Garissa.He did not comment about the arrest of the Britons.International News agency AFP quoted a spokeswoman for the Foreign Office in London who said they had been informed of the arrests by the Kenyan government. Police in Wales, the hometown of the two Britons also confirmed the arrests.The pair, believed to be from the Welsh capital Cardiff, were detained on Sunday, according to the Foreign Office in London, which said it was ready to provide consular assistance if required.“South Wales Police are currently in liaison with the Kenyan authorities in respect of two British nationals who have been detained near to the border with Somalia,” the statement said.“The identities of these persons have yet to be formally confirmed, both are believed to be from the Cardiff area. The families of these persons have been notified. These persons are being detained under Kenyan law and the force is liaising with local law enforcement to establish the circumstances of their detention.”A spokeswoman for the Foreign Office said: “We are aware of reports of two British nationals detained in Kenya on October 16. We stand by to provide consular assistance if required.”In Kenya, Nyongesa told Capital News that security had been stepped up at border towns even as Kenyan military forces advanced 120 kilometres further into rebel held regions of Somalia.Using aerial cover, the military troops advanced on Tuesday on a strategic rebel-held Somali town of Afmadow to drive off the Islamist militants into their country after a series of abductions since 2009 and the latest of four European women seized from beachfronts in Lamu and Dadaab refugee camp.Kenyan army spokesman Major Emmanuel Chirchir told Capital News that the offensive was progressing well without casualties so far. via Capital FM
Posted by Unknown at 11:29 AM