Dealing With Disengaged Fighters: The Case of al-Shabaab 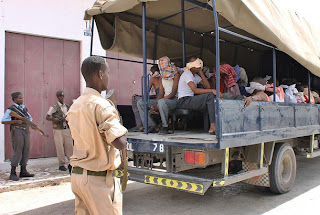 After years of dominating the headlines as Somalia’s public enemy number one, al-Shabaab is in trouble. Last week, the insurgent’s Twitter account was suspended after it was used to disseminate threats to kill Kenyan hostages held by the group. More seriously, al-Shabaab has had a bad eighteen months since its forces withdrew from central Mogadishu in August 2011. Not only are its ideological messages faltering, but its forces have been displaced from several former strongholds, and it is hemorrhaging fighters. Now is the time for the new Somali federal government and African Union (AU) forces to press home their advantage and implement a comprehensive package of measures to encourage more defections and transition so-called “disengaged” fighters to civilian lives.
Unfortunately, a lack of funds is jeopardizing the government’s new plan for dealing with Somalia’s disengaged fighters. Without adequate financial support, efforts to transition former fighters into alternative livelihoods will fail and “disengaging” will prove only temporary as disgruntled individuals turn against the government or to banditry. There is currently an opportunity to deal al-Shabaab a fundamental blow. It would be extremely shortsighted not to make the most of it.
Analysis
Since its core fighters left central Mogadishu in early August 2011, al-Shabaab has been on the defensive. In October and November 2011, its forces were attacked on multiple fronts by Kenyan and Ethiopian troops who advanced from their respective borders. In December 2011, Ethiopian troops supported by some Somali militias captured the town of Belet Weyne in Hiraan province; in February 2012, they pushed al-Shabaab forces out of Baidoa, the capital of Bay region; by May, soldiers in the AU Mission in Somalia (AMISOM) succeeded in chasing almost all al-Shabaab’s fighters from the outskirts of Mogadishu and its environs; and by late September, Kenyan and allied forces captured the key strategic southern port of Kismayo, which had been a central hub for al-Shabaab’s economic and military operations.
As al-Shabaab forces came under increasing military and financial pressure, more and more of their fighters began defecting, so much so that the insurgents reportedly established a 500-strong Amniat (internal security) force to stem defections. Some fighters defected because they feared defeat in battle; others bemoaned al-Shabaab’s lack of revenue after it lost several key towns; while others simply followed their clans when they split from the insurgency. The new federal government of Somalia, AMISOM, and their international supporters must build on this momentum and implement an effective program for dealing with Somalia’s disengaging fighters, thereby striking a fundamental blow to al-Shabaab.
As of mid-January 2013, AMISOM was holding some 250 disengaging fighters while the federal government held approximately 1,500.1 The category of the “disengaged” include fighters captured in combat, individuals who have voluntarily surrendered, and those who have blended with the local population but are willing to surrender if the circumstances are right. While al-Shabaab remains the government’s principal opponent, the category is open to all armed groups and individuals who have used arms against the state but who renounce violent insurgency, surrender their weapons, and wish to live as civilians. The whole process is made more complicated by the absence of a formal peace agreement, which have usually structured most other cases of postwar disarmament, demobilization, and reintegration programs around the world.
Initiatives in this area made significant headway in October 2011 when Somali authorities adopted the National Security and Stabilization Plan for 2011-2014 which emphasized the need to develop programs for disengaged fighters. In March 2012, a consultation of international partners, NGOs and technical experts, and the Somali authorities gathered in Mogadishu to determine a framework and set of operating procedures for managing disengaging fighters. In August, the federal government published a National Disengagement Framework which would operate at several levels: international, federal, district, and local community. It involved establishing a network of reception centers (under military authority, both AMISOM and Somali National Security Forces); transition centers (under the authority of the Ministry of the Interior), and local centers (under civilian local government or NGO authorities).
Today, the federal government is working on several pilot schemes involving amnesty programs, weapons buy-back initiatives, and mechanisms to separate child soldiers from their adult counterparts (the former going to UNICEF camps). Several external actors provided assistance for certain dimensions of these activities, including the UN Political Office for Somalia, the UN’s International Organization for Migration, which developed draft standard operating procedures, and the government of Norway, which provided financial support for the treatment and handling of disengaging combatants in several camps in Mogadishu.
The central obstacle, however, remains lack of financial and material resources. In August 2012, for example, the AU lamented the lack of resources to cater for needs of some 3,000 disengaged former fighters.2 The situation had not improved by October when Augustine Mahiga, the head of the UN Political Office in Somalia, acknowledged that the plan for dealing with the disengaged “has not yet started for lack of funding.”3 Yet the amount of money involved is not large by international peacebuilding standards. In their August 2012 appeal, the Somali authorities presented a total budget of $19 million to cover outreach activities, reception centers, safe houses, the rehabilitation of transit centers, and long-term reintegration initiatives.
Without the necessary financial support, efforts to transition former fighters into alternative livelihoods will fail, and “disengaging” will prove only temporary as disgruntled individuals turn against the government or to banditry. Given the significant military and political progress that has been made in Somalia over the last year, it would be a major blunder to skimp on this crucial part of the enterprise.
Paul D. Williams is an Associate Professor and Associate Director of the Security Policy Studies program in the Elliott School of International Affairs at the George Washington University.
via IPI International Peace Institute
Posted by Siad barre at 8:53 PM