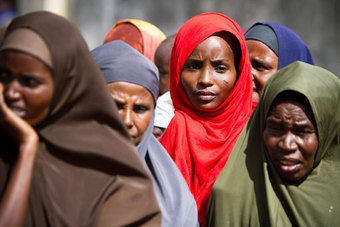 Residents of Bo'o say a dark cloud has descended upon their small village ever since three suspected al-Shabaab gunmen opened fire on women leaving a wedding party there last week.
Adan Abdalla Ahmed, 52, who sells clothes in Hudur, said al-Shabaab is trying to create tension between residents and the Somali government by making life more difficult with skyrocketing food prices.
Al-Shabaab militants who control villages and towns surrounding Hudur have prevented supply vehicles coming from Mogadishu from going beyond the Abal district, 20 kilometres east of Hudur, the Bakol regional capital.
"Al-Shabaab fighters have positioned themselves on all the roads that enter the city and have stopped everything from entering it," Ahmed told Sabahi, adding that even pastoralists who used to bring milk into Hudur have been denied entry.
"The militants threaten anyone going to or coming from the city and tell them they will be killed if they are caught coming to Hudur again," he said.
Warder Ahmed Abdi, 30, who brings foodstuffs by donkey to Hudur from surrounding areas, said traders delivering goods into the city put their lives in danger every time they enter Hudur. He said traders resort to taking longer routes to avoid al-Shabaab roadblocks.
"When we leave the Abal district, we cannot take the direct path [to Hudur] and we are forced to circumvent and hide from al-Shabaab," Abdi told Sabahi. "If al-Shabaab fighters see us, they will harm us and burn our goods. They will treat us badly and threaten to kill us if we try to take goods to Hudur again."

Women and children affected most

Halima Nur, a 35-year-old resident of Hudur, said al-Shabaab is inflicting the most harm on the women and children of Hudur.
"I used to own a small store in the town where I sold tea to provide for my children's livelihood. That has become extremely difficult, as everything has become expensive. I do not know what to do because the whole town is locked down and no one can leave."
"This is not a life," said Nur, a widow and sole provider for her three children.
Hudur District Commissioner Mohamed Moalin Ahmed said his administration is aware of the difficulties al-Shabaab is inflicting on the residents of Hudur and that they are working to restore normalcy and liberate the entire region "soon".
"Under my administration, we trained an armed unit of about 800 troops with the help of the Ethiopian army in the Bakol region," Ahmed said. "The troops are now ready to take part in the liberation of areas held by the enemy. We are now in the final phase of preparation and all the regions inhabited by innocent civilians who are being harmed by al-Shabaab will be liberated." ..via- sabahi
Posted by Unknown at 6:44 PM