Professor Samatar: An Avowed Unionist running the gauntlet in a secessionist enclave 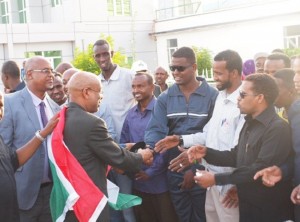 Some of us may frown upon Samatar’s sudden and unexpected visit to Hargeisa. The visit may be interpreted as  a sellout of his Unionist position and a betrayal of his Hiil-Qaran party principals. Hiil-Qaran after all stood for “Coming to the aid of the failed State of Somalia as a whole”.
After he disembarked from the plane that ferried him and his entourage to Hargeisa, he knelt and kissed the ground in a gesture of a long lost son who finally came back home.  Sadly, he was greeted with the flag that he stood against for a very long time. The Somaliland flag that represents division and secession was unceremoniously draped around his shoulders as if to remind him that he is now in a land that does not believe in the blue Somali flag: a flag that sports a five pointed star representing greater Somalia for which Samatar and other unionists like him campaigned most of their adult lives.
Samatar grew up with the dream of a united Somalia and he continued pursuing that dream for most of his journalistic and academic career. The professor vehemently wrote and spoke against the secession of  his native Somaliland and decided to steer clear from the secessionist state where he could not even visit his  mother for fear of being incarcerated.
The current visit is probably his first since the collapse of the Somali State and it seems that he may have received assurances guaranteeing his well-being.  There is a sharp contrast between the treatment he received after campaigning hard to be elected as Somalia’s president;  and the treatment that Boqor Rabi,  who merely travelled to Mogadishu, received. The latter languishes in a prison serving a two year term while Samatar has been welcomed in Hargeisa although not to the level that he expected as he later admitted in his birth place, Gabilay, a city not far from Hargeisa.
His sudden visit comes in the wake of a series of town hall meetings in Minnesota where he attacked the Federal Government of Somalia in Mogadishu and expressed his disappointment with the South after developing a feeling of being an outsider who was deliberately pushed aside in his attempt to run for the highest office in Somalia.
via wardheernews
Samatar and his younger brother Abdi invested heavily in Hiil-Qaran and had high hopes of standing out in the race for Villa Somalia. Unfortunately, Samatar failed to inspire a parliament populated by opportunistic individuals who valued monetary gains over knowledge and leadership. He garnered a measly eight votes and joined the prestigious club of highly qualified also-rans that included Dr. Badiow,  Dr. Abdi-Weli Gaas and Dr. Abdirahman M. Hashi, other heavyweights who lacked a deep purse like him. It is public knowledge that thousands of dollars changed hands in the election of the current president who cannot compete against Samatar and the other candidates when it comes to leadership, charisma and knowledge. But what else could be expected from a process based on a mixture of clan politics and foreign meddling. The sad thing though is how Samatar got affected by the process to the extent of selling his soul to the secessionist enclave.
Regardless of the obvious flaws in the process of electing a Somali president, which will hopefully be rectified if and when Somalia reaches its goal of an election that does not rely on clan politics and the infamous 4.5 formula,  Samatar seems to have betrayed many who looked up to him as a unionist who defended the blue flag. His first declaration in Hargeisa was that Somaliland used to be a separate country before it gained its independence from the British and voluntarily joined South Somalia to form the Somali Republic. Such a statement uttered by a highly qualified scholar is indeed worrisome and may signal a new Samatar who may have turned his back on a long and illustrious unionist legacy.
His declared intention of visiting all corners of Somaliland including remote towns like Eirgavo may stem from his desire to gauge the extent of the secession sentiment among the population of the former British Somaliland and thus justify his new position. Hopefully he will include Unionist bastions like Badhan, Las Qoray, Las Anod, Buhodle and Taleh in his itinerary.
On a positive note, his visit may herald a new dialogue in former British Somaliland between secessionists and unionists in which Dr. Samatar, with his persuasive arguments,  can paint a clear picture for the Somaliland leaders:  that they may have hit a brick wall in their fruitless endeavor to seek world recognition and that it is about time for a new strategy that brings together all Northern clans in a setting like the famous “Gol Khaatumo”  after convincing Silanyo to withdraw his militia from all Unionist territories.
Short of that, Samatar will just become another frustrated XaglaToosiye in Hargeisa even if he is offered the Foreign Affairs portfolio in Somaliland as some analysts are predicting.
Ali H. Abdulla
aliegeh@gmail.com
Posted by Unknown at 2:28 PM