Abdi Mohamud Omar: From Humble Beginning To The Greatest Achiever‏ 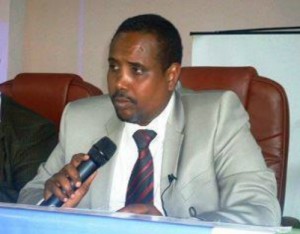 For so many years, the Ogaden region of Ethiopia has only known anarchy, destruction and destitution. As the Ethiopia government and ONLF rebels jostled for control, poor masses suffered. TV coverage and Western media beamed the images of malnourished children and the anguish of the elderly, children and women trying to escape. The anguish of destruction left the region underdeveloped while the rest of Ethiopia prospered under the EPRDF.
Economic hardships coupled with the on-going clashes rendered thousands dispossessed and in indigent state. I became disillusioned and disenchanted with a region I once hoped will one day overcome the quandaries that has affected them for many years. Then came Abdi Mohamud Omar, a young, vibrant and enthusiastic leader who replaced misery and despair of a traumatised region with sanguinity and optimism.
The international community portrayal of the region has significantly changed. Much of the negative coverage of the region by western outlets has moved away from this paradigm. Today, most international and African news outlets now have programmes specifically designed to champion positive news stories in the region, for example, ESTV horumarka degaanka somaalida.
Managing a region that is enormously underdeveloped is a formidable challenge for any person, especially so for one that has endured a long conflict. No one can question the president’s leadership potential to change the region especially at a time of lull, when the peace talks between ONLF rebels and the Ethiopia government are still on-going. Friends and foes alike are however, in full praise of the Mr Omar’s initiatives.
Every element of Mr Omar’s development plan has been masterfully executed to depict him as perfect presidential material worth thousand praises, rightfully so. Within a short period of his presidency, he was able to transform and propel the region into greater heights, from drilling boreholes, building schools to constructing roads.
It really is important to see Mr Omar’s grand development plan applied so well, development wise he is on message at every turn. I can’t think of many leaders that have developed a region within a short period so intelligently. He will always be remembered as the saviour and redeemer of a traumatised region and its people.
The president is tune with the changing realities on the ground. Africa and the donor countries are on the verge of a new partnership, not one of dependency and aid but one of shared ideas, vision and investments that increase mutual prosperities, a key tenet of Mr Omar’s address to the diaspora on his last visit to the UK. Mr Omar has created an enabling environment for the private sector in the diaspora to invest in the region, with many including my closest friend investing in healthcare. A vibrant private sector is critical for capable, reliable and transparent societies. Without a dynamic private sector, the gains made by Mr Omar in developing the region will grind to halt.
The author is community organisor and political commentator at EAVA FM
Zakariya Mohamed,
britishsomalicongress@gmail.com
Posted by Siad barre at 4:27 PM