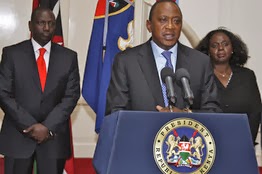 NAIROBI, Kenya—President Uhuru Kenyatta said on Tuesday that militants inside an upscale shopping mall here have been "shamed and defeated," four days after the siege began.
In an address to the nation on Tuesday night, Mr. Kenyatta said five militants had been killed and 11 suspects were in police custody.
Mr. Kenyatta also mentioned unconfirmed intelligence reports that two or three Americans were involved as well as a British woman, but said an investigation into the nationalities of the attackers was continuing.
Militants entered the popular Westgate shopping mall—a popular spot for wealthy Kenyan and expatriates—and began shooting at the Saturday lunchtime crowd.
In a fierce final exchange as night fell Tuesday, Kenyan soldiers fired rocket propelled grenades at insurgents, triggering the explosives that the al Shabaab militants had rigged inside the building, according to a group of soldiers outside of the mall.
The massive blasts caused three of the mall's floors to collapse upon each other. Although the structure of the building remained, the collapsed floors made survival for anyone inside unlikely, according to a lieutenant in the Kenyan Defense Forces.
The lieutenant said he hadn't seen any hostages during the final stages of the operation.
"As far as we're concerned, the operation is complete," he said. "We don't expect there's anyone alive in there."
The lieutenant said it wasn't possible to see inside the building because power systems had been destroyed. Rescue operations were expected only expected to begin Wednesday morning, he said.
"We have shamed and defeated our attackers," he said..   more
Posted by Siad barre at 1:02 PM