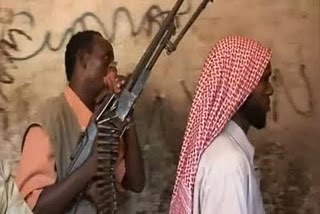 DEVELOPING: US Navy SEALS have conducted a raid of the Al Shabaab militant group in Somalia, killing at least one militant, Fox News confirms.
The group is linked to last month's Kenya mall attack that killed more than 60 people.
In Somalia, officials say international military forces carried out a pre-dawn strike Saturday against foreign fighters in the town of Barawe. Officials say the strike was aimed at "high-profile" targets.
The strike comes two weeks after Al Shabaab militants attacked Nairobi's Westgate Mall.
BREAKING: US Navy Seals have killed the head of the Al Shabaab militant group, Fox News confirms
Somali officials said a raid by unknown foreign commandos in the coastal town of Barawe Saturday apparently targeted the militant group al-Shabaab.
The attack occurred two weeks after al-Shabaab carried out a bloody terrorist attack on a shopping mall in neighboring Kenya, and targeted what a Somali intelligence source said were "high-profile" foreign targets, Britain's The Independent said.
Reports from Barawe, about 150 miles south of the capital Mogadishu, said the commandos came ashore in small boats under cover of darkness and may have been supported by helicopters.
The source said the raiders were from another country but it was not immediately clear who they were and what damage or casualties the inflicted. Somalia's army does not have the capability to carry out such a seemingly sophisticated attack, the report said.
U.S. Navy SEALs sprung a similar attack in the same town in 2009 and killed a senior al-Qaida operative.
A spokesman for the military wing of al-Shabaab, which has strong ties to al-Qaida, issued a statement blaming unspecified western nations, the Shabelle Media Network reported.
"They tried to attack a house which belongs to the mujahidin but we retaliated back and forced them to flee. They escaped using speedboats and left behind some equipment which they used," spokesman Abu Mus'ab said in a recorded audio posted in the Islamist website.