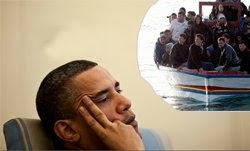 Last week, a boat carrying mostly Eritreans capsized off the cost of Italian Island of Lampedusa and claimed hundreds of Eritrean lives.
Following the tragedy, the Eritrean Government issued a statement holding the U.S. government, corroborated by concrete evidence, primarily responsible for the gross loss of human life.
Besides reiterating its determination to defend the rights of its citizens in appropriate forums, the statement also calls for an investigation into the current and previous reprehensive crimes by an independent body.
For an honest observer, holding the U.S. responsible for these and other related death of Eritreans might seem outlandish. However, it is suffice to look in to what President Obama have said about his administration’s involvement in the trafficking of Eritreans out of their country in collaboration with some organisations and countries in the region.
In a speech he gave at the Clinton Global Initiative Annual meeting on September 25, 2012, he said,
“I recently renewed sanctions on some of the worst abusers, including North Korea and Eritrea. We’re partnering with groups that help women and children escape from the grip of their abusers. We’re helping other countries step up their own efforts. And we’re seeing results.”
This was the first time the U.S. administration publicly admits its involvement in the human trafficking of Eritreans.
Reading between the lines, one can get the impression that, the call for renewed sanctions against Eritrea was because the administration felt Eritrea is the worst human rights abuser and so the U.S. start partnering with groups and NGOs that smuggle and kidnap women and children out of Eritrea.
The President was also admitting that he is helping other countries (like Ethiopia and Djibouti) to step up their own efforts (… in collaboration with UNHCR) by opening stations and camps to facilitate easy border crossing for these smuggled Eritreans.
A year later, President Obama start seeing “results” of his unrelenting trafficking of Eritreans. The massacre of hundreds of Eritreans in Lampedusa last week and thousands of previous similar deaths in Sinai and Malta are vivid examples of his administration’s crimes against these poor east African people and their country.
(Outsourced from Haile Abrham’s opinion on dehai.org)
Posted by Unknown at 10:38 AM