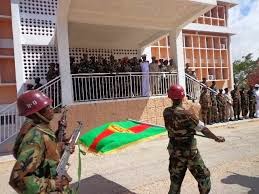 Mogadishu (tf.sf) Two senior officers of Somalia National Army announced that they have left the army after heavy rift with the leading officer of the National Army, RBC Radio reports.
Col. Abdirisak Said Hussein said he has decided to to resign after the top national army commander rejected to pay for the deceased soldiers’ families living in a very poor life.
“We have proposed the list of hundred soldiers who were killed in the line of duty, but unfortunate the commander in chief of the army rejected.” Col. Hussein told local media.
Col, Hussein argued that the national defense law gives full promise to the children and families of the deceased servicemen and servicewoman.
“We have decided to leave the service because we will be like those who were killed and the children were neglected”. he added.
The ministry of defense and the commanders of the national could not be reached for comment following the allegations from the two senior officers.
Posted by Siad barre at 7:52 AM