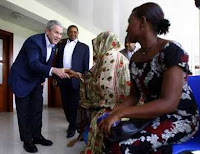 A $100 million item in the 2009 budget will fund training for more African peacekeepers for Darfur, a spokeswoman for U.S. President George Bush said.Of that total, $12 million would be earmarked for Rwanda, where the president and first lady Laura Bush were visiting Tuesday during their African tour, White House spokeswoman Dana Perino said.Other countries that will benefit from the funds include Ethiopia, Ghana, Senegal, Tanzania, Burkina Faso and Malawi, Perino said. The money had been dedicated to building, maintaining and operating African Union base camps but the United Nation took over that responsibility, the money could be reallocated.Training of peacekeeping troops "is what most of the countries have said that they could really use help on," Perino told reporters traveling with the president and first lady.While in Rwanda, the Bushes visited Kigali Memorial Center, which houses exhibits documenting the 1994 Rwandan genocide."This is a moving place that can't help but shake your emotions to your very foundation," Bush said after the museum tour. "It reminds me that we must not let these kind of actions take place."
Posted by Unknown at 7:58 AM