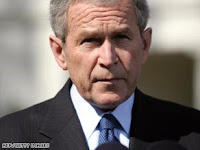 MONROVIA, Liberia (AP) -- In a humid rehearsal studio, Liberia's pop queen is practicing her newest single -- a song called "Thank you" to be released for President Bush's visit here next week.

US President George W. Bush speaks on the eve of the planned five-nation trip to Africa.

Her head tilted back, Juli Endee pulls the microphone close and belts out, "Thank you, George Bush." dig more http://edition.cnn.com/2008/WORLD/africa/02/15/africa.thanks.bush.ap/
Posted by Siad barre at 10:01 AM